Advent Sunday. All over the world, in ‘Quires and Places where they Sing’, organists will be playing J.S. Bach’s ‘Wachet Auf’ – Sleepers Awake. Or, to give the work its ‘Sunday’ title, ‘Wachet auf, ruft uns die Stimme’, BWV 645. This translates as ‘Wake, awake, for night is flying’.  This is the first number in The Six Schübler Chorales. The history of this work is relatively straightforward. Around 1746, Bach decided to select six chorales from his cantatas and arrange them for organ. (There is some argument about the source of the second piece: no extant cantata exists for this). The Chorale Preludes were engraved by a former pupil, Johann Georg Schübler, resident of Zella in Thuringia. They were published in 1747/8. It has been noted that the score contains several printing errors, which may suggest that the composer did not proof-read it.
The great polymath and Bach scholar Albert Schweitzer raised some doubts about the effectiveness of these pieces. He considered that they do not go ‘particularly well’ on the organ. Most organists and listeners would tend to (respectfully) disagree with him. 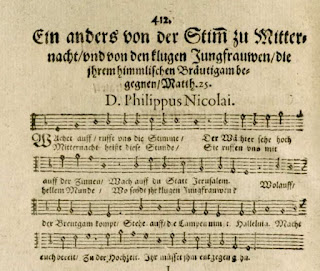 ‘Wachet Auf’ is based on a melody by Philipp Nicolai (1556-1608). Nicloai was a German Lutheran pastor, poet and amateur musician. In 1599 he published a hymnbook, Freuden Spiegel deß ewigen Lebens (The Joyful Mirror of Eternal Life) which included the tune.
Bach first used this tune in his Cantata BWV 140. Here the chorale melody is heard as written in the 1st, 4th and 7th movements. This was composed whilst he was residing in Leipzig. It was devised for the 27th Sunday after Trinity and was first performed on 25 November 1731.  The Gospel of the Day was the parable of the Ten Virgins (Matthew 25:1-13).  The coming season of Advent was being anticipated. The tune is first heard in the opening movement sung to the words ‘Wachet Auf’:

"Wake, awake, for night is flying,"
the watchmen on the heights are crying;
"Awake, Jerusalem, arise!"
Midnight hears the welcome voices
and at the thrilling cry rejoices:
"Where are the virgins pure and wise?
The Bridegroom comes: Awake!
Your lamps with gladness take!
Alleluia!
With bridal care and faith's bold prayer,
to meet the Bridegroom, come, prepare!"
Translated Catherine Winkworth (1827-78)

In the fourth movement of the cantata this melody is now sung by the tenors in unison (or solo tenor) with the strings providing the well-loved obligato accompaniment and the continuo which was figured in the customary manner.

This imagery may well imply the bridal procession alluded to in the Gospel. Charles Hubert Hastings Parry has written colourfully: ‘that this singular and delightful passage has the intention of a dance tune; by which is indicated that Bach had in his mind the procession of the betrothed and the joyous attendance of the virgins, whose gestures have a wayward grace which is suggestive of Botticelli. At first the quaintness of the suggestion rather balks acquiescence. But when the extraordinary vivacity of Bach's imagination is taken into account, it may be admitted that among the many things which influenced the product, the idea of the virgins of allegory participating in the welcome of the heavenly Bridegroom may have had a share’.
Another more prosaic interpretation of this music was made by C. Stanford Terry, who insisted that the it illustrates:
[Zion hört die Wächter singen]
Zion hears the watchmen singing,
and in her heart new joy is springing.
She wakes, she rises from her gloom.
For her Lord comes down all-glorious
and strong in grace, in truth victorious.
Her star is risen, her light is come!
Now come, O Blessed One,
Lord Jesus, God's own Son.
Sing hosanna!
We answer all in joy your call;
we follow to the wedding hall.
Translated Catherine Winkworth (1827-78)

These words come from the fourth movement of the Cantata. This interpretation is more appropriate for its current use as an Advent chorale prelude.

The organ transcription in the Six Schübler Chorales is virtually note for note derived from the cantata, however ‘the figures which indicate chords to be used as accompaniment’ (figured bass) are omitted. 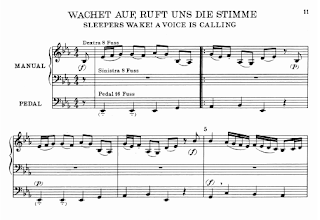 The pedal part is more awkward that Bach may have wished. This is because it is an almost direct transcription from the ‘orchestral’ setting of the original cantata.
Peter Williams (The Organ Music of J.S. Bach, Cambridge University Press, 1980, 2003) has made several pertinent comments on this chorale prelude. He notes that the ornaments in the obligato line are ‘different, (more generous but inconsistent)’ to the original. Secondly, the chorale melody itself is more ‘decorated’. As noted above, the ‘figured-bass’ has not been realised. And finally, the forte/piano dynamics have been omitted from the ‘cantus’ (melody) entries.
‘Wachet Auf’ can be played on any two-manual organ with pedals, providing it has two octaves of pedals and a light touch on the keys. Stainton B. Taylor suggests that the tenor part is played by the left hand on an 8ft stop, whilst the obligato is played on another manual by the right hand with an 8ft diapason stop. The characteristic bass is heard on the pedal. This represents only the foundation stops. Higher pitch stops can be used. In a performing study of this chorale preluded written by Anne Marsden Thomas she advises that ‘you might choose for the left hand: reed or principal 8' (no louder than mf ); for the pedal: flute 16', principal 8'; right hand: flute 8', principal 4'.’

Never knew that J.S. Bach is considered to be BRITISH music!

I think that I am allowed to step out beyond the parameters of hard and fast rules! Besides the clue is in the opening paragraph...What could be more British than the concept of 'Choirs and Places where they Sing?.

I have often prefaced a post with "It's Not British But..."

It seems to me that the easiest way to play Wachet Auf is to play the bass part with the left hand and the chorale part with the pedals. It's an especially attractive idea for me because I'm not so hot on the pedals, and there is a nice 4' trumpet stop for the pedals, but nothing quite as nice to carry the melody on the swell keyboard. Is this too weird? I can't imagine why nobody would have tried this before, because the chorale melody is much easier to play with the pedals instead of the bass part, which jumps all over the place.