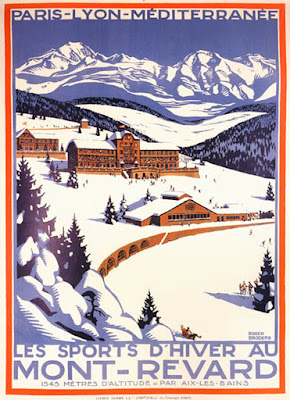 In one sense, little needs to be said about the delightful ‘Sleigh Ride’ by Frederick Delius.  It is popular, evocative and totally satisfying. End of story. But… This short piece has long been a favourite of mine. It conjures up as no other music does - except Leroy Anderson’s Sleigh Ride - the joy of this mode of travel on a cold, frosty winter’s day. It is an ideal ‘secular’ Christmas piece.

‘Sleigh Ride’ is the second number of Three Small Tone Poems for orchestra written between 1888-90.  However, they were not premiered until 18 November 1946, during that year’s Delius Festival. Then, the Croydon Philharmonic Society was conducted by Richard Austin. Thomas Beecham was at the concert and directed several other pieces.
The Three Small Tone Poems musically portray three of the four seasons, with the other two being ‘Summer Evening’ and ‘Spring Morning’. It has been noted that there is some documentary evidence that a final number called ‘Autumn’ was composed, but subsequently lost. ‘Summer Evening’ is my favourite of the surviving pieces. This is a lovely, sensuous number that seems to me to reflect lovers watching a sunset on a warm night probably from a ‘high hill’.
After 1946, Delius enthusiasts did not have another opportunity of to hear ‘Spring Morning’ until the Marco Polo recording in 1986.  It is a gentle piece that evokes the awakening of nature: it is typically restrained before reaching a gorgeous climax. Peace is restored. It is impossible to know if ‘Spring Morning’ was inspired by Florida, England, Norway or elsewhere. It seems a pity that it is hardly known to listeners. Clearly it is ‘a companion piece’ to Delius’s Idylle de Printemps written in 1889 which explores a similar atmosphere.

The story goes that Delius’s Sleigh Ride was originally a piano work, Norwegische Schlittenfahrt (Norwegian Sleigh Ride) since lost. Philip Threlfall (1977) states that the piece was first performed in Leipzig on Christmas Eve 1887. Edvard Grieg, Johan Halvorsen and Christian Sinding (Rustle of Spring fame) attended a party. Lionel Carley (1993) has cited a letter written by Grieg to Frants Beyer (25/12/87): ‘After the meal we were, without exception, all plastered, but the programme had to be adhered to and it offered music, music and still more music! What a Christmas Eve! … Mr Delius played a piano piece which he calls ‘Norwegische Schlittenfahrt’ with great talent.’

The title of the orchestral piece in the original holograph was written as |Winternacht Charakter Stück für Orchester| |Fritz Delius| |1889|. It was subsequently changed to ‘Sleigh Ride’ which is an equally good, if a little less prosaic title.
The score carries the following note: ‘One Christmas eve I stood in the open air. The moon shone bright over the billowing landscape. The sound of an approaching sleigh was heard from a distance, but it soon rushed by and disappeared. And then gradually it was once stiller and brighter and peaceful.’ (Translated here from the German).

The ethos of ‘Sleigh Ride’ imagines the passing of a sleigh along a country lane in the depth of winter. It is composed in a straightforward ABAB form.  I guess it is seen from the perspective a bystander. The sound of soft sleigh bells are heard as the sled approaches, followed by a gentle pizzicato figure. Then the main theme is heard, initially played on the piccolo. The music rises to a climax. After this subsides, Delius introduces a quieter, more reflective interlude.  Soon, the main theme returns but now gets quieter as the sleigh disappears into the night. Delius concludes his tone poem with another dreamy interlude which evokes the moonlit and snowbound landscape in silence and repose. Who knows what the watcher is thinking? Perhaps they are recalling a winter’s night journey with someone he or she loved many years previously? Whatever the romance or otherwise behind this piece, the listener is in no doubt that this is a very chilly, frosty night.

It is possible that Delius was paying tribute to his friend Greig. It takes little imagination to hear echoes of the Norwegian Bridal Procession, op.19, no.2 in the main ‘sleigh’ theme. Other influences may have included Nos. 3 and 4 from the Humoresques, op. 6. Andrew J. Boyle (2017) has called attention to ‘idiomatic folk music traits [used by Grieg] including a pedal bass’, used in the slow section of the work. Finally, Boyle notes that in the ‘short coda, Delius borrows a device straight from the Grieg toolbox: chromatically falling lines.’  Boyle suggests that ‘we can easily imagine Grieg standing by the punch bowl that Christmas Eve acknowledging with a wry smile the elegant and humorous gift’ of the original piano piece from his English friend.
Despite these influences Delius has not descended to pastiche or parody. This is a valid composition that provides an admiring and friendly nod to Greig. Interestingly, Delius was to arrange Grieg’s Norwegian’s Bridal Procession, op.19, no.2 for orchestra, completed on 2 December 1889.

A lovely performance of Frederick Delius’s Sleigh Ride can be heard on YouTube. The Royal Scottish Orchestra is conducted David Lloyd.  There are some 17 versions of this work currently listed in the Arkiv Catalogues of CDs. These range from the early Royal Philharmonic Orchestra/Thomas Beecham edition released in 1956 to Andrew Davis conducting the Bergen Philharmonic Orchestra issued in 2013.