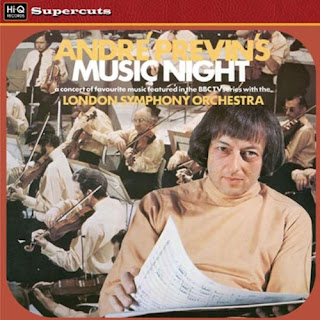 It was with great sadness that the musical community heard of André Previn’s death 28 February 2019. Much coverage of the story was predicated around the ubiquitous appearance on Morecambe and Wise in 1971: I remember that episode well. But it is well to remember the breadth of Previn’s career as a pianist, composer, arranger, conductor and author. His musical interests crossed many boundaries: from jazz, film scores, musicals, concert music and pop. It must not be forgotten that he did so much to encourage interest in classical music, both on his television (Meet Andre Previn and Andre Previn’s Music Night) series and in his published books.
The illustration for this post has nothing to do with the Trio. It is chosen simply because I once owned the LP pictured. Where I got it from, I cannot recall. I wish I had kept it.

My only ‘war story’ about André Previn concerns a record shop that used to exist just opposite Charing Cross Station on The Strand. I was engrossed in the browsers working my way slowly from right to left, and, working his way from left to right…was the Maestro. We bumped into each other, I apologised; he apologised and smiled. He knew that I knew who he was.
I have never really come across any of his compositions - apart from a handful of piano pieces. I know that he is a composer of considerable stature, diversity and quantity. The Arkiv catalogue currently lists some 46 CDs featuring Previn’s music, some of it from his film scores and ‘jazz songs’ but also including a fair few orchestral works like his piano and violin concertos. If I had ‘nine lives’ these would be areas slated for exploration. several years ago, I was privileged to review one of his most vibrant chamber works.

Previn’s Trio was composed during 1995 and was premiered in New York on 31 January 1996. This work is a clever synthesis of styles. Poulenc may be the exemplar, but jazz and even moments of ‘pop’ are skilfully blended into the texture. The ‘spikiness’ of Stravinsky is another influence. ‘Elegance’ would seem to be the watchword in the first movement: for anyone who thinks that a bassoon must always play the part of a clown, Previn shows that it can also take the role of philosopher and lover. The slow movement is particularly haunting with its languorous melodies played by oboe and bassoon. The composer lets his hair down in the finale - jazz phrases and ‘breaks’ are the order of the day, always piquant, and rhythmically free but definitely establishing the work in a long line of ‘American’ works from Gershwin to Copland and beyond. This is sophisticated music that is entertaining as well as just occasionally challenging.

A splendid performance of Andre Previn’s Trio for piano, oboe and bassoon (1996) can he heard on YouTube. This is performed by Nancy Ambrose King, oboe, Jeffrey Lyman, bassoon and Michael Adcock, piano. It was recorded live in Britton Recital Hall, Moore Music Building, University of Michigan School of Music, Theatre & Dance on Sunday, November 11, 2018.