Ivor Gurney: ‘The Songs I Had’ 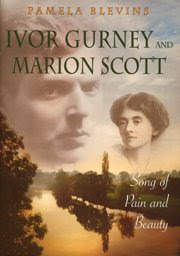 I was privileged to hear Pamela Blevins present a fine illustrated lecture on Ivor Gurney. This explored the composer/poet’s life “against a background of his times, journeying with him as he moved through the worlds of war, poetry and music, enjoyed romance and tasted success.” But perhaps the most interesting, if depressing part of this talk was concerned with “providing insights into the nature of his [Gurney’s] illness and its effect on his music.

For me, three critical points emerged from this lecture. All of them I have been aware of but believe that listeners to Gurney’’ music need to be reminded of from time to time.

1. Gurney did not suffer from shell shock. This notion was first formall promulgated by his friend Marion Scott in the 1954 edition of Groves Dictionary. It has remained in the popular psyche ever since, in spite of many efforts to present the facts. The truth was that Gurney was “locked in a losing battle with the worsening symptoms of the bipolar illness that struck him as a teenager and would eventually derail his genius".
2. Gurney did not spend the final fifteen years of his life in an asylum reliving the horrors of the Great War. Blevins made abundantly clear that his time in the army was in fact productive both musically and poetically. He made a great soldier and the discipline of army life led to an improvement in his mental health rather than a deterioration. It was not until after the war that he began to struggle again with his manic depression.
3. There is nothing positive to be gained by publishing every scrap of Gurney’s music, poetry and correspondence. There is a danger that scholars and musicians try to revive various works that are not worthy to the composer’s reputation. Naturally there will be a few gems amongst the unpublished scores, but much of the ‘asylum years’ music is unfocused and suffers from ‘grass-hoppering.’

The lecture was well illustrated with music – vocal, piano and even orchestral. Perhaps the piece that most impressed me is the recently discovered song Western Sailors. However, in spite of the fact that this is supposedly a late work, Pamela Blevins feels it could belong to an earlier period. Certainly it is a great song that displays none of the faults that are often apparent in his later scores.

Pamela Blevins is to be congratulated on both her lecture and the considerable work that she does for British Music. Her recent study of “Ivor Gurney and Marion Scott” from Boydell Press is essential reading for all enthusiasts of Gurney and English song. Her work for the Maud Powell and the Gerald Finzi Society in the United States is equally impressive. She is co-founder and editor of The Maud Powell Signature on-line journal which majors on Women in music – as composers, performers and educators.
Posted by John France at 06:15

I recently came across you blog you have a good content all I want to say is I really enjoy reading it. Thanks!

I have favourited this blog which I found by accident. Thank you!!!