Adam Pounds: The Martyrdom of Latimer 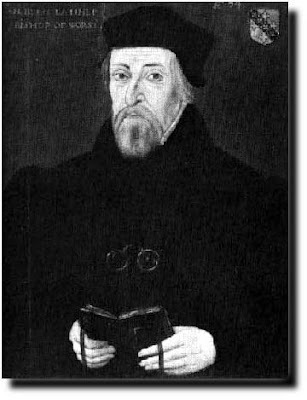 Adam Pounds, the Cambridge composer has informed me that he has "just completed the score to ‘The Martyrdom of Latimer’ for orchestra. It was been commissioned by the Ely Sinfonia and will be performed in Ely Cathedral on Saturday October 3rd together with Beethoven’s Fifth Symphony and Mozart’s Requiem. The orchestra will be conducted by Steve Bingham.

I am looking forward to writing more about this work, and hope that is will be subsequently recorded. In the meantime the composer ahs given me this short precis of the piece.

"‘The Martyrdom of Latimer’ explores the final days of Latimer’s life and his death at the stake. I have employed modal themes and liturgical ideas combined with strong rhythmic statements. The orchestra, which is fairly large, also employs four trumpet parts. Two of the players are to be sited in the gallery. The piece was started on March 23rd and took shape very quickly, being completed on the 15th May. I was asked to explore the concept of resurrection in the piece. To this end, I have designed a coda which employs material earlier in the work that embodies Latimer’s character – some of it is based on the music of the Tudor composer Robert White. When this music returns it is extended and uses strong ‘open’ intervals. This is intended to reinforce the concept that in death, Latimer became more powerful and therefore ‘alive’."
It sounds an exiting project!
Posted by John France at 06:00