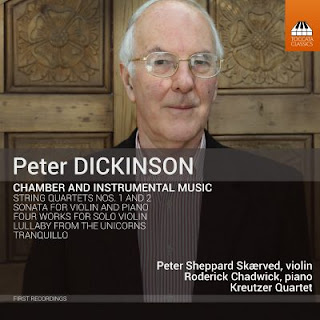 I decided to review this exciting new album of music by Peter Dickinson chronologically. I am beholden to the liner notes, as I have never heard any of these compositions before (except two other incarnations of the Lullaby). All are premiere recordings. For details of the composer, please see the helpful biographical notes on his webpage.
The earliest work is the Metamorphosis for solo violin. This was originally composed during 1955 for solo flute but was revised in 1971 for violin. The piece opens with a gorgeous pastoral diatonic melody, which sounds totally innocuous. But suddenly, as the title implies, it is transformed into something hectic, chromatic, vibrant and certainly not bucolic.

The Quintet Melody dates from 1956. The composer tells us that this is all that survives of a large scale five movement quintet for violin, cello, flute, clarinet and harpsichord. This was premiered at the Cambridge University Musical Club on 27 October 1956. For an unknown reason, Dickinson destroyed the work, but later found the present theme on the back of a sheet of manuscript paper. It is dedicated to the American composer Elliott Schwartz. If the present fragment is anything to go by, it is a pity that the entire work is no longer extant. It is a beautiful, elegiac melody that is haunting and strangely uplifting.

Looking at Peter Dickinson’s catalogue reveals that he has written two string quartets. The first was composed during 1958 but was subsequently revised in 2010. It was written after Dickinson had arrived in New York. The liner notes explain that some American critics found that it was ‘aggressively modern.’ Listening to this remarkable work more than 60 years later is less challenging. There are three contrasting movements. The opening ‘allegro molto’ is frenetic, with fragments of melody being tossed around with abandon. It is exhilarating music but is unable to come to a resolution. The slow movement is written in ‘ternary’ form. An almost romantic ‘Bergian’ solo violin melody opens the proceedings. The ‘trio’ indulges in some bizarre sounds, sometimes played ‘con legno’. In other words, the soloist hits the strings with the back of the bow rather than with the hair. Plucked and struck, this is an adventure in string sound. The movement ends with the solo cello recalling the opening violin solo. The finale is a reminiscence on what has been previously heard. Fragmentary melodies, sometimes lyrical, other times dissonant predominate. This ‘allegro misterioso’ lives up to its title. But eventually, a sense of optimism breaks through. All four players combine in a terrific climax, before the work ends in what sounds like a chord resolving with quartertones. Altogether a great string quartet, that is brilliantly played.

The Air for solo violin, begins in Dickinson’s ‘benign’ style, and surprisingly stays there. A timeless and quite ravishing tune is presented with little to trouble the ears of even the most conservative of listeners. It was originally written for solo flute.  A version of this ‘Air’ found its way into Recorder Music (1973) composed for David Munrow.

The last of the 1950s works is the Fantasia for solo violin. This was composed in 1959 for fellow student, the Greek American composer Dinos Constantinides (b.1929) whilst both men were graduate students at the Julliard School. It is a technically demanding work, that may be based on a ‘tone-row.’ Certainly, the music is full of large melodic leaps beloved by serialist composers. The music is vibrant and exciting, as befits a work that was inspired by Manhattan skyscrapers. Dickinson writes that the opening ‘declamation reaches up, mirroring these’ ubiquitous building. It was first heard at an ‘all-Peter Dickinson concert at International House, Riverside Drive, New York, on 3 May 1959. I would love to see the programme book for that event!

The Violin Sonata is possibly the most challenging music on this disc, especially for listeners who may not naturally relate to serial music. The Sonata is the last of Dickinson’s ‘American period’ works. It was composed during the severe winter of 1961. Dickinson recalls that ‘Manhattan was closed for three days; snow was piled up on the pavements for months. I had ideal working conditions for the piece in almost total winter isolation.’ The first movement is aggressive. No doubt about that. There is virtually no coming together of the two soloists. Each has their own agenda. What a mood change, then, to the proceedings is heard in the slow movement. I am not sure that I would have guessed it at first hearing, but the old English tune ‘Greensleeves’ underlies this music. The composer has used the technique of octave displacement to ‘hide’ the rustic melody. This method involves moving some of the notes into different octaves (and certainly modifying the rhythm). I would need to see the score and have pen and paper in hand to work out the details! Whatever the structural principles, this is no piece of light music. The finale is brilliant, dashing music. Here, there are diverse styles: sometimes hints of jazz, blues and even rock, with nods to the baroque era in the final fugal passage. It wraps up what is, for me, an engrossing violin sonata.

Although the liner notes state that all these works are premiere recordings, I did review the Lullaby in two of its incarnations. These versions for solo piano and for clarinet and piano were included on Peter Dickinson’s Translations: Early Chamber Works issued by (Prima Facie PFNSCD009) a couple of years ago. The Lullaby is a gorgeous piece of music that vacillates between palm court and recital room. It is beautifully played here in this version for violin and piano. Not so happy about the source of this music, though. It was extracted from sketches for an opera, The Unicorns. This story was about two competing countries who wanted to secure these rare, mystical creatures for research. I hope that in the projected opera the politicians got their comeuppance!

The String Quartet No.2 was completed in 1976. The title seems a little bit of a misnomer on first hearing. For, in amongst the typically slow-moving string texture there is a piano part. Let me try (with the help of the liner notes and a conversation with the composer) to explain. The piece is based around a piano ‘rag’ written in Dickinson’s student days, but subsequently destroyed. (I wish composers wouldn’t do that! Hide them away, with an embargo, but never destroy a work of art. It may be of interest to scholars down the road). The work is all about trying to remember the ‘lost’ rag. The substance of the piece is derived from this half-remembered tune. The pianist’s contribution, at first, is fragmentary. Rapid snippets with gaps and recalled fragments come and go for a large part of this work. The quartet is also playing the rag, but much slowed down and with blurring of obvious rhythm.  Slowly the keyboard and the string quartet make a rapprochement and begin get their act together. Just occasionally it seems that a tune will finally emerge – complete! Eventually the pianist has grasped the totality of the rag: there are now no gaps. This leads to the ‘ragtime’ played by quartet and pianist at full speed, but ‘comically out of synchronisation.’ Peter Dickinson has told me that the two parts – quartet and piano rag - are only loosely combined, not notated strictly against each other. The listener should be aware the Quartet is recorded as two tracks. The composer has assured me that this is a single movement work. The second ‘track’ simply marks the place where the two elements, quartet and piano come together and get up to speed. It is not a second movement. The piano part can be played ‘live’ or from a previously made recording (as here).
Initially this was my least favourite piece on this CD, but having listened to it several times, it is beginning to grow on me. There is a certain rare beauty in this slowly evolving music. It is a splendid example of contemporary (1976) ‘art music’ meeting Ragtime. And I don’t know who comes off best, if anyone. Charles Ives would have been delighted with this work.

The most recent piece on this disc the lyrical Tranquillo for violin and piano. It is part of the middle movement of Peter Dickinson’s Violin Concerto (1986) (see review here). The composer explains that the slow movement consists of four adagios. This Tranquillo is the third of these. The melody is a ‘popular’ version of the opening theme of Beethoven’s Spring Sonata for violin and piano, recast as a 1930 dance song.

The liner-notes, written by the composer are excellent. They have been essential in writing my review.  It includes a short ‘autobiography.’ The sound quality is superb, with the detail of this often-complex music clear and bright. As this is a CD full of premieres, I have nothing to compare performances with. Yet everything tells me that we have definitive performances of all nine works. Special mention must go to Peter Sheppard Skærved whose technique both is compelling and spellbinding.

I enjoyed and appreciated virtually every bar of these varied and sometimes challenging pieces. Peter Dickinson is a composer with whom I can do business: I look forward to subsequent releases from his considerable catalogue.