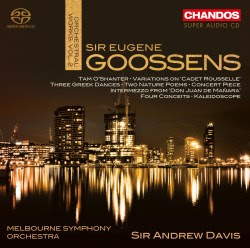 Many years ago the organist at St Andrew’s Church, Stepps, near Glasgow was a gentleman by the name of Kenneth Dawkins. He hailed from Birmingham. He told me many tales, some of which may have been exaggerated. However, I do believe that it was true he had played a piano duet with Maurice Ravel. The relevant tale is this. One day, as a young man, he was in a shop in Birmingham and had bought a copy of Goossens’ Kaleidoscope which had just been published.  He ended up at a friend’s house and went across to the piano and sight-read through the dozen miniature tone poems. His friend was entertaining a guest and… you’ve guessed it – it was Eugene Goossens. Fortunately Mr. Dawkins was complimentary. I recall him playing these pieces to me from his copy of the sheet music that had been autographed by the composer. I think they are quite simply magical.
Kaleidoscope began life as a suite of a dozen pieces published in 1918.  In 1920 the composer orchestrated the ‘Hurdy Gurdy Man’ for the well-known ballerina Tamara Karsavina who was the Prima Ballerina of the Ballets Russes.  Some six years later the film director Ernest Irving had the entire suite arranged for chamber orchestra – this was featured in a ballet called The Tragedy of Fashion.  The liner notes suggest that this spurred Goossens on to make his own arrangement - he scored eight of them for full orchestra and subtitled it as a ‘Suite for Children’. It was first heard in this version during the 1933 Promenade Concerts.

The work may have been predicated on things that (once) appealed to children –such as ‘The March of the Wooden Soldier’ and ‘The Punch and Judy Show’ yet the musical style and sound world is hardly designed to appeal to young people of any era. There is a huge emotional difference between the edgy ‘Good Morning’ and the sad and reflective closing ‘Good-night’. The ‘Promenade’ is wistful and does not really suggest high spirits or a child’s romping around.  The ‘Hurdy Gurdy’ man is a sad little character as is the Wooden Soldier who seems to have fought his final battle. And how wretched is the ‘Lament for a Departed Doll’? It is heart-breaking, but stunningly beautiful music. I love the wit of the ‘Old Musical Box’ – it plays such a lively little tune. The ‘Punch and Judy Show’ reflects the dichotomy of this age-old entertainment – the humour and cruelty.
Kaleidoscope is subtle and often introverted music that fuses impressionism with neo-classicism. It is up to the listener to decide if this music is parody or pastiche. R.H. Hull, writing in 1932 suggested that ‘Goossens [Suite] is effective... even though the border-line between calculated amusement and unintentional triviality is not always clear.’ I must add that I love every note of this work – either in its piano or orchestral versions.  Out of interest the missing movements from the orchestration are ‘The Rocking Horse’, ‘A Ghost Story’, the ‘Clockwork Dancer’ and ‘A Merry Party’.

Most listeners will be familiar with Malcolm Arnold’s well-known Overture: ‘Tam O’ Shanter’. Fewer will know the other musical interpretations of this poem by George W. Chadwick (1918-19), Learmont Drysdale (1890) and the ‘Humoresque’ Tam by Sir Alexander Mackenzie. Another entry on this list is the short ‘Scherzo’ for orchestra by Eugene Goossens.  Enthusiasts will know the piece from the Vernon Handley recording made in 1996.  This is a short number that does not try to make a detailed match of Robert Burn’s text to the music.  What Goossens has done is to pick a few elements from the tale and pack them into the three and half minute scherzo. The effect is impressive. It is easy to pick out the shambling horse in the opening bars, the build up to the chase, the dance and the escape –all in a compressed form. There are only occasional ‘scottisms’ in the music. It was first heard at a Royal Philharmonic Society concert at Queen’s Hall, London on 29 April 1919 conducted by Geoffrey Toye.

The ‘Three Greek Dances’ were composed in 1926 (revised 1927) for the choreographer and dance educator Margaret Morris. The liner notes point out that her style was ‘synonymous with a style of dancing that we associate with the 1920s; making shapes on stage with arms and flowing robes.’  Morris’ contribution was to create a dance and movement training methodology. This was called the ‘Margaret Morris Movement’ (MMM). To be fair to her, it was an attempt at creating something that was more natural for dancers than so-called ‘classical ballet’ choreography.  The three dances are quite simply delicious in mood. It is difficult to categorise – but it is fair to say that Goossens beats the impressionists at their own game. It is almost an English La Mer. I am not sure if the imagery is meant to imply ancient or modern Greece, but that does not seem to matter. I guess that as MMM implies flowing robes that will suggest ‘ancient’ but the musical picture could be of the Greek Islands at the present day. Eugene Goossens also wrote ‘Three Pagan Hymns’ for Margaret Morris.

A totally different sound world is entered with the Concert Piece, Op.65 for oboe/cor anglais, two harps and orchestra which dates from 1957. It was premiered in 1958 by Eugene Goossens’ brother Leon and his two sisters, the harpists Sidonie and Marie. It was written to showcase their skills. It has been said on more than one occasion that this work is valedictory. There are certainly notes of regret, sadness, longing and even despair. However, the work lightens up towards the end with a pastiche circus polka. I had to listen to this piece a couple of times, and even then I am not sure that I like the work. Yet something tells me it is a masterpiece. There is an impressionistic mood to some of this music although the harmonic language is at times more ‘advanced.’ The composer makes use of a number of instrumental effects on the harps including threading paper through the strings to give a percussive effect and ‘thrummed’ accompaniment. There is always a good balance between the reed tone of the oboe and the iridescent sounds of the harps. One unusual feature of these ‘variations’ is the quotations from ‘famous’ orchestral repertoire.

The Four Conceits, Op.20 are another example of a set of piano pieces that Goossens has chosen to orchestrate. They were originally composed during the Great War in 1917. In this case Goossens orchestrated the work immediately and it was heard in this version the following year.  According to the liner notes, Diaghilev used the work as ‘Symphonic Interlude’ during the 1919 season of Ballets russes at the Alhambra Theatre. These four pieces are tiny. The opening ‘Conceit’ is entitled ‘Gargoyle’ who is a bit spooky, but certainly not scary. The ‘Dance Memories’ is a little waltz with scraps of themes tossed about. There is little romance here, more bitter-sweet. The ‘Walking Tune’ has a theme that one seems to know but cannot quite place. Perhaps Percy Grainger is called to mind. The finale is related to Kaleidoscope: the ‘Marionette Show’ reveals some lively and malevolent characters. But who is evil – the puppets or the puppet master? It is the quality of the orchestration that makes these into a credible orchestral work, in spite of their short duration.

The short Variations on ‘Cadet Rousselle’ were composed in 1918 at the behest of the music critic Edwin Evans. Four composers produced a small set of variations on the French folk song that satirized a French bailiff by the name of Guillaume (William) Rousselle. They were Arnold Bax, Frank Bridge, John Ireland and Eugene Goossens. These were originally devised for soprano and piano. Goossens made this attractive and humorous transcription for orchestra in 1930. It is hardly a masterwork, but certainly deserves its place on this CD.

The Two Nature Poem presented here began life as Three Nature Poems, Op.25 and were originally devised for piano solo. They were composed in 1919. The three movements were – ‘Awakening’, ‘Pastoral’ and ‘Bacchanal’. In 1937 the composer chose to orchestrate only the second and third Poems. The liner notes are correct in warning the listener not to expect an ‘idyllic English scene’ in the Pastoral. Having said that, I do feel this music is not quite as bleak as Lewis Foreman has suggested. It is more a Northern landscape (Mill-stone Grit, Pennine) than something with blue southern skies. The muted trumpets may well suggest a blasted heath? This is appropriate bearing in mind when the pieces were originally composed. The ‘Bacchanal’ is a masterpiece: this is a riot of orchestral colour that amply suggests the wine, women and song that was the modus operandi of the god Bacchus and his merry crew.

The opera Don Juan de Mañara was composed in 1935 and duly received a single performance at the Royal Opera House, Covent Garden.  The libretto of the opera had been written by Arnold Bennett and was based on a story by the great French novelist Alexandre Dumas’ father.  The plot would appear to have lost its way, and would be regarded as being a bit ‘melodramatic’ by today’s opera-goers. The ‘Intermezzo’ was a prelude to Act IV which was set in the Church of the Sacred Rosary. This is attractive music and it makes one wonder what the rest of the opera must have sounded like.  Interestingly, Gerald Finzi was not impressed, he felt that it ‘had not the bones of life in it’ and that it was ‘second hand [Richard] Strauss.’

It is almost redundant to praise the excellent sound quality of this CD. The same applies to the enthusiastic, but always sensitive and sympathetic playing by the Melbourne Symphony Orchestra and Sir Andrew Davis. The liner notes written by Lewis Foreman are informative and make essential reading.

This CD is a tremendously important addition to the catalogues. The main competitor is Vernon Handley’s fine 3-CD retrospective of the composers music recorded on ABC CLASSICS 476 7632. Chandos are picking up a number of loose ends. Volume 1 included the fundamental Symphony No.1 and the ‘Phantasy’ Concerto for piano and orchestra Op. 60.  Looking at Goossens catalogue there are certainly more works to be recorded. I am not aware if it is the intention to record the ‘complete’ orchestral works’ or just a selection. Let us hope it is the former option. There are a number of withdrawn works that may be ripe for rediscovery – such as the symphonic poems based on ‘Ossian’ and ‘Perseus’. Then there is the ‘Cowboy’ Fantasy and the Variations on a Theme of Eugene Goossens. Some of his stage music may also be worth reviving, such as the ballet-score L’ecole en crinoline and the incidental music to East of Suez. Meanwhile enjoy these eight works and take them steadily: they all deserve the listener’s undivided attention.