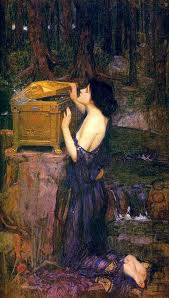 One of my discoveries of 2010 has to be the delicious orchestral waltz from Josef Holbrooke’s 1929 ballet score Pandora’s Box. This has been issued as the final track on the exciting new Dutton Epoch CD featuring the composer’s music. The disc includes the orchestral tone poem The Pit and the Pendulum, the Cello Concerto, Op.103 ‘Cambrian’ and the beautiful Symphony No.4 in B minor, Op.95 ‘Homage to Schubert’
In 1920 the main interest of ballet lovers was the Russian ballet, but there had been some progress made in developing an English Ballet. In 1920 Marian Wilson organised a season of ballet at the Kingsway Theatre, using all English dancers. Unfortunately this company was short lived and largely disappears from the annals of ballet.
The Times newspaper for October 31 1921 notes that Pandora’s Box will begin at the Kingsway Theatre on Monday 7th November, and states that it is a ballet founded on the myth with the music was by Josef Holbrooke. Rob Barnett in his excellent liner notes for the CD has found a review in the December Musical Opinion “The best thing at the Kingsway is ‘Pandora’s Box... apparently in a vein of parody: at any rate its heavy grotesque is peculiarly British'.
.
George Lowe’s 1920 book about the composer does not give any details of this work and little appears to have been written about it in the newspapers, the musical press of the internet. So there is little way of knowing what the direction of book of the ballet took. However the mythical story of Pandora’s Box is actually a serious reflection on the introduction of evil into the world. Pandora was the first woman on earth and her name means ‘giver of all’. She was created from water and earth by the god Hephaestus. The other gods gave her many gifts which included Beauty from Aphrodite, Persuasiveness from Hermes and Music from Apollo. Pandora was also given a box, actually a jar (pithos) which she was told never to open. Unfortunately curiosity got the better of her and she peeped into the jar allowing all the evils to escape. She immediately shut the jar, but managed to trap Hope inside. From this brief resume of Pandora’s story it can be seen as an ideal vehicle for a ballet and for a suitably musical score.
.
It would be easy to suggest on a first hearing of this piece that Josef Holbrooke was either indulging in a little pastiche or that he was poking fun at a certain strand of British Light music. However, I agree with Rob Barnett that if this piece was a parody, which I believe it was, it was done with a smile rather than a sneer. In fact it is a truly gorgeous piece of music with an infectious tune. I can only hope that the rest of the score is one day recorded.
Pandora can be heard on Dutton Epoch CDLX 7251
Posted by John France at 06:00