The Songs of Muriel Herbert - A Great New Discovery 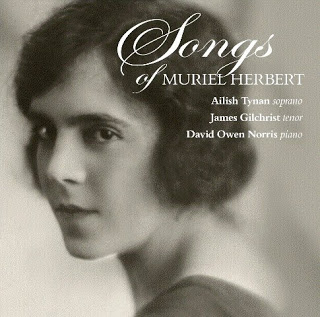 I was immediately impressed by the first piece on this CD - a fine setting of A.E.Housman's Loveliest of Trees. It is surely a brave person who dares to write a new version of a song that seems to have had its definitive setting made some dozen or so years earlier by George Butterworth. Yet history suggests that at least ten composers have thrown their hat into the ring with this text. Muriel Herbert's edition of this melancholy text is superb. It adds value to both the words and to the history of setting. There is a simplicity about the music that captures the sense of the transience of life, and there is a freshness and subtlety of the melodic line that does not attempt to parody any previous settings. For me, this is the ‘signature song’ on this disc.

I confess that I had never heard of Muriel Herbert before this CD was released. To be fair, there is no entry in Groves and, although I do not have it in front of me, there is, I believe, no reference in Sophie Fuller’s The Pandora Guide to Women Composers. There is one mention of her in Stephen Banfield’s Sense and Sensibility, and that is only a name check in the middle of a list of composers who had set Housman in the year 1923. The Internet only helps if one knows of the existence of somebody. So, like another ‘lost’ composer Janet Hamilton, Herbert has remained in the shadows- virtually forgotten.

This review is not the place for a full biography of Muriel Herbert, but a little thumbnail sketch may prove of interest.
Muriel Emily Herbert was born in Sheffield in 1897 and grew up in Liverpool in what was a musical household. By 1913 she had abandoned plans to become a concert pianist and had begun to write music – exercises for the piano and song settings of Herrick, Browning, Bridges and Christina Rossetti.
She entered the Royal College of Music in 1917 and under the auspices of composers and teachers such as Roger Quilter and Charles Villiers Stanford she began to develop her own musical voice. She was well read in poetry and had an especial fascination for Y.B. Yeats, Thomas Hardy and James Joyce. For a time, she earned money by teaching before her musical career took off – in a somewhat limited way. Roger Quilter was impressed with her songs and arranged for a number of them to be published. Barbirolli included her Two Violin Pieces in a concert in the 1920s. She also gave broadcasts of her music on the BBC. All this slowly came to an end when Muriel Herbert was married and began to raise a family. The author and historian Claire Tomalin, one of her daughters, writes that from the early nineteen-forties her mother wrote less and less music, although there were a few recitals and she still taught music and composition. The memory of what had been was largely forgotten: it was not discussed with her children. Her confidence as a composer had been lost as new styles of music began to permeate the concert halls and recital rooms.

The songs on this CD are from a wide variety of literary authors. I mention a few that particularly impressed me. These include James Joyce’s Goldenhair, I hear an army charging and She weeps over Rahoon. Ada Harrison, who was a neighbour of Herbert’s provided some charming verse for the set of six Children’s Songs and the haunting In the Days of November. A particular favourite of mine is the great poem by John Masefield, Tewksbury Road. The music is equally as great as the imagery of the words. It is strange that this poem was not set by Gurney or Finzi or Gibbs. Leigh Hunt’s Jenny Kiss'd Me is charming and imaginative. It is invidious to describe all thirty six songs, but I must mention the setting of Thomas Hardy’s Faint Heart in a Railway Train. I am not sure that this has been set before: none is noted Michael Pilkington’s book British Solo Song. Herbert’s setting is subtle, appropriate and quite moving. It captures exactly the mood of Hardy’s ‘what might have been’ poem.

It is difficult to try to suggest the influences that inform Muriel Herbert’s music. When this present CD has ‘sunk in’ to the repertoire and a deal of her music is republished, it will be possible to tie down allusions and references. Certainly, as a pupil of Stanford she has imbibed some of his style and mood. Her infatuation with Roger Quilter (until she realised that he was gay) is the most noticeable stylistic marker, yet even this is not universal. Other notes are present in this music, and it would not be too fanciful to detect echoes of Richard Strauss, Frederick Delius, Maurice Ravel and Claude Debussy. Certainly at the time when Herbert was at the Royal College of Music all these composers would have been part of the regular diet of recitals and concerts.

There is a fascinating essay included in the CD notes by Claire Tomalin, which explores the career of Muriel Herbert and her work. The saddest part is that her mother “spoke very little about the early years and she never showed me any of the songs written when she was young.” Sadly a number of researchers and students did visit her to ask about her ‘famous’ meeting with James Joyce in Paris. However no one cared to see the manuscripts that were the source of the anecdote. It is depressing that Tomalin initially had little success in promoting her mother’s music. After Muriel Herbert’s death in 1984 she “packed up all the papers she had left, and stored them in folders”. She lamented that no one was interested and recalled that one musician, to whom she showed them dismissed the songs with the comment, “Everyone’s mother wrote songs….”

Ailish Tynan and James Gilchrist along with their accompanist David Owen Norris give an impressive and committed performance of these songs. The sound quality is excellent and the presentation of the programme lends itself to listening to this CD in the order presented.

There are further possibilities for future recordings: there are two published pieces for Violin & Piano – Enchanted April and Giboulée, there is possibly an extant Violin Sonata and a number of other songs, either published or unpublished.
On the basis of this present recording, any further exploration of Muriel Herbert’s music is to be welcomed and encouraged.
This is one of my major musical discoveries of the year.

I'm very much touched by songs of Muriel Herbert which I heard on BBC Radio 3 last weekend. "The Crimson Rose" and "To Daffodil" are just exquisite. Thanks for sharing.

This is a simply lovely collection, and has been daily listening since I downloaded it. It is also good to find out more about the poems.

Thanks Christine, After I wrote my review I discvered that Head had also set these fine words!

Are you a singer/pianist??

I just found this website-- for the second time. I'm an aficionado of 20th century British music, and probably as knowledgeable as anyone. I had never heard of Muriel Herbert, but somehow, I found this CD, and was taken with the quality of the songs. When she was good, she was extremely good.

Thanks for that, Ben....she is very good indeed!