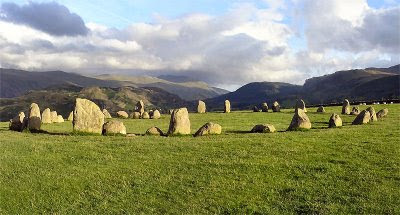 A Northern Picture is quite definitely programme music, although I guess, 'at a pinch’ it can be listened to by someone who is indifferent to the history and landscape of the Lake District. The main focus of this work is the stone circle at Castlerigg. Adam Pounds told me that this ancient monument “has always been an important place for me - its majestic setting and what it represents – meetings, mysticism and festival”. Castlerigg was a meeting place for celebrations and dancing as well as worship and Pounds has said that “the music is a collage of dance, mysticism and combat”. Interestingly most of this composer’s music is programmatic – he told me that “I rarely compose ‘pure’ music. My music is either a direct response to places, literature or events or the mind – to this end, I suppose I could be described as a New Romantic!”

The work has an enigmatic opening. Pounds told me that this was inspired by a study of echoes that he had experimented with whilst sitting on a hillside in the Lake District. It is not the half-expected or predictable ‘misty morning’ atmospherics, but more a gradual call to worship. This bidding motive is played by woodwind and brass. However, a mysterious theme begins to emerge from the low ‘cellos and basses, before a dissonant string theme briefly asserts itself. Perhaps it is here that the mists are clearing and the early morning sun is appearing over the assembled worshipers? The music builds up to a great crashing brass chord and some powerful music, before the enigmatic theme reappears.
But suddenly the mood changes. A frenetic dance breaks out that may reminds the listener of Stravinsky. Percussion underlines the music’s progress. This is dynamic music, full of repressed energy: but at this stage it is not too violent. Pounds suggests that this section represents tribal dances. Perhaps these are memories of primitive ceremonies that hover between he sublime and the barbaric. Various harmonic and melodic figures are overlaid on the powerful rhythmic undertow. Some of this section will remind the listener of Holst’s Mars or perhaps John Anthill’s Corroboree.
After a short passage of muted brass, the numinous theme is given on the strings and then descends to a dissonant woodwind passage. A melody for French horn is heard:–it is supposedly an old Celtic tune: the soloist is supported by a light orchestral accompaniment. But suddenly the tune is taken up by the orchestra and this leads to a full definitive statement. The work now begins to close but it is no return to a ‘misty landscape’. Echoes of the turbulent music are heard and are finally presented in triumph. The work ends loudly and positively, with the listener being conscious of the bare, spartan and primitive nature of much of this music.
Perhaps the abiding impression of this work is the dichotomy between Castlerigg ‘now and then’. The music seems to allow the listener to move between the two eras in their mind’s eye: it is slippery time.

When I spoke to Pounds about this work I told him that I felt he may have been influenced by Igor Stravinsky. He suggested that the passage I was alluding to, the short wind section followed by tremolando strings and muted trombones is built on the suggested harmonies of the Scriabin ‘mystic scale’. Yet the bigger picture may well remind listeners of The Rite of Spring – but without the naked violence and eroticism.
Furthermore, at the time of composing A Northern Picture Pounds had been conducting Bruckner’s Third Symphony and perhaps this had some influence on the strong brass section heard a little way in from the start. It is certainly impressive and suggests the majesty of the landscape.

A Northern Picture was composed in 1993. It was written for the Nelson Orchestra and received its first performance in December of that year. Although I have been unable to find any reviews of this work in the musical press, I understand that the reaction to this work was favourable. I guess that this work probably deserves a full professional performance, however apart from a few problems of intonation in the strings it is well done by this ensemble.

Lastly, the composer told me that he was “generally pleased with the Northern Picture” but he had no doubt that he “will re-visit it in the future or it may even manifest itself in a new work as the subject matter itself is timeless”.
The work is presently available on Cambridge Recordings CAMREC002
Posted by John France at 06:06