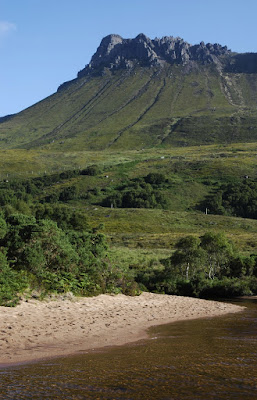 Amongst the high-octane progressive rock music and challenging avant-garde scores for which David Bedford (1937-2011) is highly regarded, there are several works which would have an immediate appeal to a wide cross-section of the listening public who may not be moved by dissonance, complexity and noise.
I recently discovered a very short piano piece by Bedford in an album of then-contemporary music. Sunset over Stac Pollaidh, completed in November 1997, is the fifteenth number in a remarkable album of diverse miniatures by 30 composers. Spectrum 2 was compiled by the pianist and music teacher Thalia Myers. It was published by The Associated Board of the Royal Schools of Music in 1999.  The rationale behind this volume was to present several ‘musically serious but un-virtuosic’ piano pieces which reflected ‘the wide spectrum of compositional trends in new music today.’ Remember, that these words were written 21 years ago. Looking at this album today provides a good conspectus of contemporary music from that period. Despite being less-demanding on pianistic technique than may be imagined – the pieces range from Grade 1 to Grade 6 – each work is inherently satisfying and can be played by amateur and professional pianists alike, both young and less so. Added value in this volume are the brief biographies of each composer.  These names include Alun Hoddinott, Richard Rodney Bennett, Edward McGuire, Edwin Roxburgh and John Tavener.

Where is Stac Pollaidh? The geographical answer is that it in the North West Highlands of Scotland. More precisely it is located some miles north of Ullapool in Inverpolly Forest in Wester Ross. The mountain is 613m (2011ft) high.
The view from the summit (on a clear day!) is stunningly impressive. To the west, virtually the entire Outer Hebrides are visible: North and South Uist, Harris and Lewis. Towards the south the Cuillin range is seen as well as most of the hills of North Skye. To the far north is the isle of North Rona.

David Bedford has provided a short ‘programme note’ appended to the score. He writes, ‘Stac Pollaidh (pronounced ‘Polly’) is a mountain in the North West Highlands of Scotland. The surrounding landscape is such that if you climb the mountain (it is a steep walk, fairly strenuous but very rewarding) the view from the top at sunset gives an atmosphere of peace and calm.’ Clearly, this statement suggests that Bedford had visited this mountain on at least one occasion. So, the piece becomes like a diary entry. I wonder if any photographs have survived in the family archives?

Sunset over Stac Pollaidh is a mere 24 bars long. It is signed to be played ‘fairly slow.’ A good metronome setting would be   = 48.  Bedford has also written some interpretive notes: ‘Try to play softly and calmly and choose a comfortable speed. The left hand should be slightly less smooth than the right hand – almost like a soft drum. The grace notes (known as graces in bagpipe music) should be played as quickly as possible before the beat.’
Typically, a bagpipe melody is continuous without a break. In order to give some space between the notes and to give some character to the ‘chant’, it is usual to introduce ‘graces.’
Bagpipe grace notes differ from those played on the piano. In this medium there are several different types of ‘graces’ with one, two, three or even four elements interspersed between the main melody.  In Sunset over Stac Pollaidh, David Bedford uses all these with the addition of a single ‘five’ and a ‘six’ grace. Typically, they are used to embellish a relatively straight forward melody. Keyboardists would call it ‘ornamentation.’
Although Bedford has suggested the left-hand part be played like a soft drum, it could also represent the bagpipe’s drone. In other words, the F in the bass is reiterated throughout. Although there is no key signature, the F major open ‘triad’ (F - C, but not the A) tends to predominate. But note that the ‘B’ is natural and not flat as would be the case in the tonal scale of F major.

The formal structure of the piece could not be more straightforward – A. A1. A2. So, in effect it is a small theme with two variations. The melody does not change between the three 8-bar sections.  The first variation is decorated with ‘graces’ of various numbers whilst in the second variation, the melody is thickened into simple triads in root position, with the melody being the fifth of the triad. In this last variation the tune the chords are played an octave up and the bass and octave below.
Stac Pollaidh is played quietly from end to end. There is no climax. The last eight bars are played ‘PPP’ with the music dying away to the end of the piece.
This is a beautiful little miniature that ‘reflects [Bedford’s] concert music style’ whilst being immediately accessible to listener and performer.

In 1999 NMC released a 2-CD set featuring music from Spectrum and Spectrum 2. The soloist was Thalia Myers. David Bedford’s Stac Pollaidh is the 20th track on Disc 2. It has been uploaded to YouTube (after the advert).

In the same year, Bedford published a short piece for solo bassoon with the confusingly similar title Dreams of Stac Pollaidh. This work was commissioned by the British bassoonist, Laurence Perkins. In 2013 it was released on the CD ‘As Far as the Eye Can See’ played by Perkins. Maybe more about that later.