A Weardale Rhapsody: A Concert for High House Chapel 2019 (DVD) 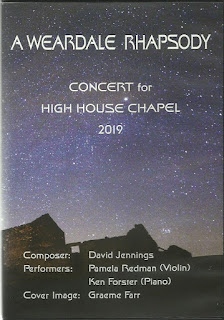 Sadly, British Methodism has been in decline for many years. The figures tell the story.  In 1906 there were around 800,000 chapel members in the United Kingdom. This dropped to around 600,000 in 1980. Forty years on, there are estimated to be about 173,000 people ‘who have made and sustained a commitment to Christian discipleship within the Methodist Church.’ There are many more who are not formally members, but regularly attend services. The fallout from this decline, has been the closure of many chapels, in both cities and towns. Some of these buildings have historical associations dating back more than two centuries. The High House Chapel in Ireshopeburn, Upper Weardale, is a good example. Built in 1760, it was until last year the world’s oldest Methodist chapel still in regular use.  It is recorded that John Wesley visited some 13 times. Originally having more than 250 members it declined to 20 by the time it closed its doors to worshippers during 2019. Fortunately, the nearby Weardale Museum, located in the old manse, has bought the redundant chapel and aims to restore it. It will become a heritage centre and arts museum. Rachel Swaffield, chair of the Friends of High House Chapel has indicated that ‘it is a fantastic opportunity for the museum, while maintaining it for its Methodist history.’ (Teesdale Mercury, 31 May 2019). It is possible that the venue will still be used as a place of worship.

The present DVD records a special concert given on 1 June 2019, as a part of the fund-raising activities. It featured a retrospective of music by North Country composer David Jennings. The soloists were Pamela Redman, violin and Ken Forster, piano. For details of the composer, please visit his excellent website.

The recital opens with Three Irish Pieces for violin and piano, written in 2011. Jennings has explained that when he wrote these pieces, he had not visited Ireland. They were dedicated to his fiancée, now his wife. She hails from Ireland. The opening number was inspired by W.B. Yeats’s poem ‘When you are old.’ Perhaps a strange choice for a piece dedicated to one’s future wife! Remember that the last verse dwells on the fact that ‘Love fled’ and ‘Hid his face among the stars.’ This music is romantic and poignant. The second piece is an expressive ‘nocturne’ which is flowing and sincere. A touch of Vaughan Williams here, I think. The finale is a romp. This ‘jig’ has all the fire and passion that would be expected from Irish musicians after a glass (or two) of Guinness.  It is a thoroughly enjoyable Suite.

David Jennings’s Three Sonatinas, op 2 were completed in 1985. The composer had just become a teenager. I understand that they have been subject to ‘a little mature revision.’ Their musical style nods to Robert Schumann’s Kinderszenen although they are never pastiche. That said, they are not like so many sonatinas: didactic pieces designed to improve the tyro pianist’s technique. The first two have three movements each and No.3 has four. Each movement is given a title, some of which are generic, like ‘Prelude’, ‘Minuet’ and ‘Finale.’ Others are a little more poetic, such as ‘Elegy’, ‘Nocturne’ and ‘Moto Perpetuo.’  My favourite movement is the ‘Nocturne’ from Sonatina No.2.  All three Sonatinas present wistful and sophisticated music that never falls back on sheer sentimentality or mawkishness.  Although I have not seen the scores, I can confidently state that they are technically difficult, without being virtuosic, demanding the listener’s concentration from the first note to the last. They are a superb achievement for a 13-year-old schoolboy.
When I reviewed (here) these pieces back in 2012, I felt that all three sonatinas should be heard at a sitting, in numerical order. That is what has happened on this DVD, save the Three Lyrical Pieces are interposed just before No.3. And this was played after the interval. I still hold to my original contention.

These Three Lyrical Pieces, op.17 were composed in 2010; they are dedicated to fellow composer Robin Field and his wife, Jean.  Jennings explained that the middle movement ‘Cavatina’ was the first to be written. It was a commission from ‘The Lakes 2010 Piano Competition.’ This piece is a delight, nodding back to the musical language of the Sonatinas.  Jennings felt that it was too short (just under two minutes) to ‘stand on its own’ so he wrote the opening ‘Evening Twilight’ which found its muse in a water colour by George Barret, Jr. (1767-1842). The last number is a rather peculiar little ‘Waltz’ which seems to have got its traditional attributes mixed up: every so often the music falls into 4/4 time. Harmonically, this is the most ‘advanced’ of these Lyrical Pieces. Nothing too ear bending, just a little bit of welcome piquancy.

David Jennings’ Passacaglia and Fugue (In memory of Arthur Butterworth), op.12 is a concatenation of two pieces composed several years apart. The opening ‘passacaglia’ was originally part of the finale of his Piano Sonata. op.1 which was begun in 1988 and completed in its original form in 1995: it was further revised in 2009. Interestingly, this Sonata was much admired by Arthur Butterworth (1923-2014).
The second part of op.12, the ‘Fugue’, was formerly included in the composer’s Serenade for orchestra, op.16.  The remarkable thing about this piece is that it is not an elegy as such. There is nothing depressing or sombre about this music.  The passacaglia opens with a beautifully expansive tune heard first on the piano and then the violin. This is elevated music, without a hint of sentimentality. The fugue on the other hand is bouncy and full of energy, with a surprisingly powerful coda. Paul Conway (Musical Opinion, July-September 2019) has suggested that ‘Jennings chose to convey something of Arthur’s positive and forward-looking character.’

The Harvest Moon Suite, op.19 was written in 2010. It is inspired by the work of six nineteenth century English watercolourists. As the composer is keen to point out, this is not a North Country Pictures at an Exhibition. The key difference is that Modest Mussorgsky wrote music that was largely dramatic, whereas Jennings has created a suite that is typically romantic and lyrical but also sometimes deeply reflective in mood. There are six descriptive movements: ‘Stags in Knole Park’ (Robert Hills), ‘Aira Force’ (Edward Richardson), ‘The Haunted Abbey’ (William Payne), ‘Harvest Moon’ (George Barret, Jn), ‘Harlech Castle’ (Thomas Miles Richardson) and ‘Innisfallen Lake’ (George Fennel Robson).  Stylistically, these pieces are in the trajectory of 20th century British piano music. Echoes may be heard of John Ireland and York Bowen. Yet this is not pastiche, but a genuinely attractive suite that speaks in the composer’ own ‘dialect’. I guess the success of the Harvest Moon Suite derives from the inherently bitter/sweet nature of the musical language. Finally, it is worthwhile to search for these paintings on the Internet.

The last work was the ‘world premiere’ of the heartfelt A Weardale Rhapsody for violin and piano. For those whose geography is a wee bit rusty, Weardale is a valley largely in County Durham which runs from the grouse moors around Burnhope Seat in the high Pennines, eastwards towards Durham. The River Wear itself flows along this valley, eventually falling into the North Sea at Sunderland. Weardale was once important for lead mining, and several relics of this industry can be found here. It was the workmen and their families who were part of the impetus for the Methodist Revival which became a stronghold of the faith in the late 18th century.
David Jennings told me that this Rhapsody was ‘inspired by the landscape, people and history of the valley.’ He insists that he aimed ‘to write a work that is direct and of broad appeal which celebrates a surprisingly little-known, but nevertheless very special part of our country.’
The is a tri-partite work, although there is a strong impression of through-composed music here. The opening is lyrical, with wonderfully exhilarating upward violin passages (larks ascending?). This music is poised in mood. The central section introduces material that is folk-like in character. The piano part is toccata like in sound. If I didn’t know the title of this piece, I would have wondered if Scotland might have been the stimulation here. Eventually, the opening theme returns, but this time in a more decorated form and much richer in texture. Here are birds singing and water gurgling down rills. The work fades away into the early morning mist, with some quiet harmonics on the violin accompanied by multi-note arabesques on the piano. It is a lovely, evocative work that achieves its stated aim of ‘rhapsodizing’ on the Pennine landscape.
During the performance, the music was accompanied by a splendid ‘visual aid’ projected onto a screen behind the soloists. These featured photographs of Weardale captured by ‘talented local photographers’ however, the DVD viewer does not see enough of this.

There are two issues with this excellent conspectus of David Jennings music. Firstly, it must be accepted that it is not a ‘professional studio recording.’ This is not a criticism of the violinist and pianist’s performance, but quite simply the recording. An ‘electric’ piano was used, and this sounds good.  As it is a live performance, there are one or two coughs, some applause and the odd thing falling to the floor.
Secondly, and I think more significantly, there is no booklet. The composer told me that he personally introduced each piece, but it was not included in the DVD. This is a pity. Apart from reading my review[!], the viewer will need to investigate details of each work from other recordings of this music, where available. Furthermore, there is no ‘cueing’ on the disc. The programme is divided into two ‘parts’ but the viewer has to guess where they are in the programme. This is helped by the fact the titles of the sheet music can sometimes be seen on the piano… I guess that a little text note introduced onto the DVD would have been helpful.

This is a great introduction to David Jennings instrumental music. Several of these pieces appeared on the Divine Art record label (dda  25110) in 2012 (reviewed here and here). However, the Three Irish Pieces, the Passacaglia and Fugue for violin and piano, and the recent Weardale Rhapsody are ‘premiere recordings.’

The DVD is priced £10 with all proceeds going to the Weardale Museum. It is available from Rachel Swaffield; her email is rachel_swaffield@hotmail.co.uk (note the underscore between her names). It can also be ordered directly from the Weardale Museum, Ireshopeburn, Bishop Auckland, DL13 1HD (Tel: 01388 517433) during the periods the museum is open.