Some thoughts about Bruce Montgomery: Composer and Detective Novelist 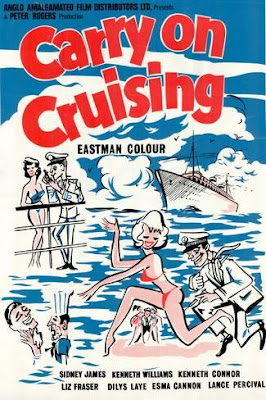 It was on the P&O liner Oriana that I discovered Bruce Montgomery. In fact, it was quite a coincidence, with three strands coming together at once. Let me explain. The cruise's first ‘leg’ was the long but relaxing journey from to . I spent most of the time eating, reading, swimming in the pool and listening to a carefully chosen play list of ‘classical’ music on my iPod. An apparently annoying habit I developed was whistling the ‘hornpipe’ as I walked round the promenade deck. But not just any ‘hornpipe’ – it was the catchy version used in that great comedy classic (at least I think so) Carry on Cruising. I could talk for hours about this film. There are so many ‘classic’ lines – 'I’ve been up to the sharp end, I‘ve been to the blunt end…'  'Italy has nothing to offer me I cannot get here (the bar!) – break out the Chianti…' etc. etc.

I had been reading an article about detective novels in general and so-called ‘locked room’ mysteries in particular. One of the texts mentioned was a book called The Moving Toyshop by a writer called Edmund Crispin. This was part of my holiday reading. And last, but not least, I included several classical music CDs in my listening plan – including a certain Concertino for String Orchestra.  It was not part of my plan to make connections – but I did. I soon realised that all three of the above indulgences were written or composed by a remarkable, if somewhat melancholic, man called Bruce Montgomery.

I imagine that relatively few folk will have heard of Bruce Montgomery, yet there will be hardly a person in the United Kingdom who is not acquainted with at least half a dozen of his film scores. I have already alluded to Carry on Cruising – add to this Constable, Nurse, Regardless, Sergeant and Teacher. I can only presume that everybody must respond to a least one of these classic excursions into British comedy. But Montgomery did not just compose music for the Carry On films: he provided scores for the equally enjoyable Doctor movies starring the redoubtable Dirk Bogarde, Leslie Phillips and James Robertson Justice.  How often do we look for the composer’s name in the credits of a film? I guess rarely.

Bruce Montgomery was born in Chesham Bois in 1921.  He had a good education both locally and at , .  He studied modern languages and subsequently filled the vacant post of organ scholar there – the incumbent had gone off to fight Hitler.
was inspired to write his first detective novel after reading a book by one of the mid-century doyens of that genre, John Dickson Carr.  He was motivated to write The Case of the Gilded Fly in an unbelievably short time, and it was equally speedily published by Victor Gollanz in 1944. It was the first foray of the detective/don Gervase Fen into the criminal complexities of . Fen, a professor of English Language, was to feature in most of ’s subsequent crime writings. The detective novels were all written using the pseudonym of Edmund Crispin.
Clearly, Gervase Fen may have had a profound influence on Colin Dexter and his ‘scholarly policeman’ Inspector Endeavour Morse.

Concurrently with his writing, was keen to follow a musical career.  His early works were small scale piano pieces or anthems.  His masterpiece, apparently, is An Oxford Requiem which was commissioned by the Oxford Bach Choir to celebrate the Festival of Britain in 1951.  I have not heard this work. The Times reviewer believed that this ‘is Montgomery’s most considerable achievement to date; it confirms the suspicion that he is a composer with something of real significance to say.’ According to contemporary reviews, a recording of this work may well be long overdue.

Bruce Montgomery was not a major ‘concert hall’ composer. He had only some twenty-four works published – most of which was choral or vocal music.  However, two key works stand out for me – the above-mentioned Concertino (a modest title) and the Overture to a Fairy Tale. In addition, there are the attractive Scottish Aubade and the Scottish Lullaby – both re-workings of film scores. But the critical thing is, that these four works would be a feather in the cap of any composer – both great and small.  They are interesting, well-wrought and full of character.

When Bruce Montgomery turned his hand to the lucrative business of film music, his compositional career really took off. In total, he provided the score for some forty odd films of greater or lesser importance. Perhaps his greatest achievement was in producing both the music and the screenplay for Raising the Wind – a comical story about music students. David Whittle in his study of the composer, tells the tale that Kenneth Williams and Leslie Phillips were coached on how to conduct Rossini’s William Tell Overture.  Furthermore, Montgomery himself had a cameo role in this film on the podium.
Alas, had a propensity to fail to meet the strict deadlines that the film producers imposed. This came to a head when the music for Carry on Cruising had to be completed by Eric Rogers.
The years after ‘Carry on Cruising’ marked a decline in Montgomery’s health and fortunes. Poor health and alcoholism led to long stays in clinics, little work and financial insecurity. He spent the last fifteen years of his life contributing reviews to the Times, editing collections of Science Fiction stories and writing his ninth and last novel, The Glimpses of the Moon. Bruce Montgomery died on .

Thanks for keeping the BM/EC name alive. I'm always surprised by his book titles, which never quite mean what they suggest. Here is an interesting sidelight for those who know their movies (spoiler alert): Alfred Hitchcock, having read either the novel or a precis of The Vanishing Toyshop, took out an "option". However, whether or not it was AH's original intention to film it, the only part that made it onto celluloid was the sequence on the fairground ride at the end of the book, transported wholesale onto Strangers On A Train. I knew the movie long before I read the book, and I'm still not sure which conveys the greater feeling of sheer terror.

My own favourite is "Buried For Pleasure" - a lovely English bucolic romp with nasty overtones.