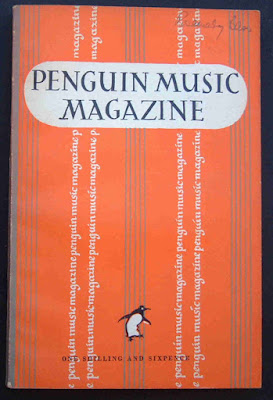 As part of the Penguin Music Magazine’s overview of music during 1947 in the United Kingdom, the Scottish author, poet and broadcaster Maurice Lindsay reported on ‘Scotland’ for the ‘Northern Diary’ section of the journal. I want to look at the first few paragraphs where he considers the dearth of Scottish ‘classical’ music at the Edinburgh Festival.

The major cultural event in Scotland in 1947 was the City of Edinburgh’s first International Festival of Music and Drama. Lindsay immediately weighs into the politics of the event by noting that the ‘columns of two leading Scottish daily newspapers (The Glasgow Herald and The Scotsman) were filled with controversy over Scotland’s representation’ at this event.  These are references demanding investigation.
Much of the criticism centred on the lack of contemporary Scottish music and drama. There were only two musical works in this category: Ian Whyte’s Piano Concerto and Dr David Stephen’s elegiac Coronach. Stephen (1869-1946) was one of Whyte’s musical teachers. Both works have disappeared from the repertoire, if they were ever really in it. The latter was heard at a London Promenade Concert, on 6 September 1935 and had reasonable success in the years prior to the Second World War.
I looked at the reviews of Ian Whyte’s Piano Concerto which was performed at the Usher Hall, Edinburgh on Wednesday 10 September 1947. This may be the subject of a further post, however the consensus seems to be that it is a worthy work that does tend to introduce certain elements of Scottish folk-tunes into its progress.

Maurice Lindsay writes: ‘Many people…feel that a foreign visitor…coming to Scotland for the Festival would naturally expect to be able to get some idea or what contemporary Scottish composers are doing.’ Unfortunately, the two pieces cited above, in Lindsay’s opinion ‘do not give an adequate picture of the creative position in [Scotland.]’
Current listeners have no way of proving or disproving this statement as there are no recordings of these two pieces (that I am aware of) in the catalogues. They may exist in private or corporate collections. On the other hand, Lindsay states that within ‘the last eighteen months or so, Cedric Thorpe Davie’s Symphony in C has been performed under John Barbirolli and Constant Lambert in England, and Walter Susskind and Ian Whyte in Scotland.’ This, in his opinion is a work ‘of undoubted merit and an obvious choice for inclusion in that representative programme of Scottish music which should form a feature of a Scottish Festival.’
Regrettably, Cedric Thorpe Davies’ Symphony has not been given a commercial recording, although a broadcast performance circulates amongst enthusiasts.  This work was composed in 1945 in response to the Daily Express ‘Victory’ Symphony contest:  it was inscribed ‘In honour of my brother.’ The Symphony gained second prize with the first going to Bernard Stevens’ powerful Victory Symphony.
Thorpe Davie explained in a contemporary interview that ‘there are no bombs, guns or sirens in my symphony. It was meant to be cheerful and I hope that is how it sounds.’ Certainly, the work is impressive and is in the mainstream of British post-war symphonic style: it does not resort to obvious Scottish musical clichés.  It deserves to be revived.

There follows a discussion of the position of ‘art’ song at the Festival. Maurice Lindsay reminds readers that ‘Scotland’s greatest contributions to modern music so far are the songs of Francis George Scott. If any proof of this statement need be given, listen to Racheal Liddell singing Scott’s The Discreet Hint.’  Fortunately, there is a CD devoted to Scott’s songs: Moonstruck & other songs, released on the Signum label: it is available as a download.
Lindsay thinks that ‘Scott has written songs which give the impression of having behind them a ripe, unbroken Scottish vocal tradition.’ Unfortunately, Lindsay insisted that this was not the case. Much of the indigenous achievement was discouraged or actively suppressed by the Protestant Reformers in the 16th century.  On the other hand, the musicologist (composer, poet and playwright) John Purser, in a footnote in his book Scottish Music, wrote that 'There was, of course, a vast living tradition among folk-singers, and an unbroken classical tradition of setting of Scots songs, to which most classical composers in Scotland had contributed, from Thomson through MacKenzie to MacCunn.'

Francis George Scott could be likened to Charles Ives: Scott took Scottish traditional music and reformed it in his own image, in the same way as the American took Americana and recreated it with his own unique voice. Nearer to home, Scott preempted Erik Chisholm who took the Scottish bagpipe ‘Piobaireachd’ and created many derivative works utilising his own distinctive personal language.

Maurice Lindsay concludes his discussion of Scottish song by insisting that ‘the mere idea of a Festival of Music in Edinburgh without any of these fine song is, to say the least of it, puzzling and perplexing.
Time has hardly been generous to Scott. As noted above, he is represented by a single CD, albeit a masterly one. There are a few fugitive songs on compilation albums.

It could be argued that Lindsay was here indulging in a little special pleading: thirty years later he was to write the definitive study of Francis George Scott’s music and his place in the Scottish [Literary] Renaissance.