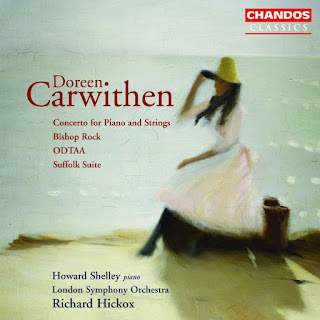 Doreen Carwithen’s Overture: Bishop Rock was first heard on Monday 14 July during the 1952 season of Promenade Concerts at the Town Hall in Birmingham. The City of Birmingham Orchestra was conducted by Rudolf Schwarz. Other music heard at this concert included Camille Saint-Saens’ Symphonic Tone Poem, Le Rouet d'Omphale (Omphale’s Spinning Wheel), Johannes Brahms’s Symphony No.4 in E minor and Edvard Grieg’s Piano Concerto in A minor, op.16. The piano soloist was the Russian pianist Shulamith Shafir.

I was able to find two reviews of this concert in the newspapers. R.R. writing in the Birmingham Daily Gazette (15 July 1952) reminded readers that Doreen Carwithen’s Overture: ODTAA (One damned thing after another!), ‘suggested by John Masefield’s eponymous novel had been previously heard in the Birmingham Town Hall (Thursday 29 January 1948). This critic considered that the Overture: Bishop Rock was ‘more mature and much richer [than ODTAA]…’ Noting the work was inspired by the famous bastion lighthouse on the furthermost (sic) point of England that the musical impression required a very large orchestra, which the composer ‘uses…well.’ He felt that the ‘taut, brassy ejaculations conjure visions of the thundering Atlantic and gentle interplay between strings and woodwind show us the surging sea in one of its few softer moods.’ The reviewer concluded by saying that ‘the work is vivid and descriptive yet framed within the discipline of satisfying musical form.’ The new work was given a ‘sterling performance by Rudolf Schwarz and the orchestra with ‘generous applause’ from a large audience received by the ’30-year old composer who took her bow from the lower gallery.
The critic in The Stage (24 July 1952) gave a long and reasoned review of the new Overture. It is worth quoting extensively: ‘When the same composer’s overture, ‘ODTAA,’… was played here four seasons ago one sensed the clear-cut craftsmanship of a young composer who had something interesting to say. Bishop Rock is a more ambitious work and contains the kind of progressive development one likes to find in new composers. Scored for a large orchestra, the music is a vivid and original depiction of the surging swell of the usually angry Atlantic at this bastion outpost of far Western England. Though primarily pictorial, with bold brass writing for the sea in mighty mood, and quiet cross-reference between strings and woodwind for those irregular moments of calm, the work is well shaped musically. The orchestra played with vigour and appreciation for scoring that is well laid out for the considerable forces it employs.’

In 1997 Chandos Records released a retrospective CD of Carwithen’ music (CHAN 9524, rereleased in 2006 on CHAN 10365X). This included the above-mentioned Overture ODTAA (One Damn Thing After Another) (1945), the Concerto for piano and strings (1948), the Suffolk Suite:  Prelude, Orford Ness, Suffolk Morris, Framlingham Castle (1964) as well as the Overture: Bishops’ Rock (1952). All four pieces were Premiere Performances. The London Symphony Orchestra was conducted by Richard Hickox and the piano soloist was Howard Shelley. Only the Piano Concerto has been given a further recording on SOMMCD254.

Guy Rickards (Tempo, October 2009) reviewing this CD felt that ‘the two overtures, ODTAA and Bishop Rock…are more workaday [than the Piano Concerto] but still exhibit the same high degree of craftsmanship. Bax and Walton come nearer the surface here, particularly in the more rhetorical moments, but neither piece ever descends into mere imitation.’
The Gramophone (May 1997 was positive about this new CD. Edward Greenfield was impressed by Doreen Carwithen’s vigorous and lyrical music, which was hidden for many years as she ‘selflessly devoted herself instead to the music of her husband.’ Greenfield notes that the Overture: Bishop Rock presents ‘a craggy sea-picture, vividly evocative, lashed by various syncopations.’ He remarks that the main theme is ‘later transformed to show the sea in gentle but menacing mood, with the cor anglais equally evocative.’
Finally, Hubert Culot writing in the British Music Society Newsletter (no.74, June 1997) considered that Bishop Rock was a ‘short colourful overture evoking the furthermost English lighthouse.’ He felt that the ‘music vividly depicts the various mood of the ocean surrounding it: at times agitated and menacing (a superb horn tune), at times calmer (… solo violin and solo winds.’ The work concluded ‘in a glorious blaze of sound with a powerful restatement of the ‘lighthouse’ theme.
As mentioned earlier, Doreen Carwithen’s seascape is on a par with several other examples, including those by Bax and Mendelssohn. It deserves to be encountered in the concert hall on a regular basis. And probably demands at least another recording. The only one made so far, is more than 20 years old.