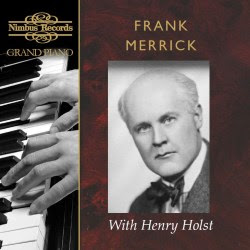 I liked the two Violin Sonatas by the Swedish composer Gunnar de Frumerie on CD 3. I have heard very little of his music. These sonatas are exciting and thoughtful by turn.  I guess that I would like to hear them in a modern recording.  Jean Sibelius’s little ‘Sonatine’ in E major, op.80 was written in 1915. This work exudes wit and sheer happiness, possibly inspired by a Christmastide sleigh-ride. The lack of angst is reflected in Holst and Merrick’s take.

The final CD presents Max Reger’s massive Violin Sonata no.5 in F sharp minor, op.84 composed in 1905. Listening to this excellent performance (notwithstanding the above-mentioned caveats) I wondered why Reger is typically regarded as dry-as-dust. This is a big work, possibly even overblown, that demands our attention. The two flanking movements are intense and virtuosic whilst the gentler middle one is over in a flash. The finale is cast as an ‘introductory’ theme, followed by seven variations with a ‘triumphant’ fugue thrown in for good measure. I think that I surprised myself by finding this one of the most enjoyable (for me) pieces in this collection.

The second work by Reger is the Janus-like Suite in the Olden Style composed in 1906. Since that time, the composer has ‘dished it up’ for full orchestra by which it is (slightly) better known.  Listeners will discern nods towards J.S. Bach’s ‘Brandenburg’ Concerto no.3 in the opening swashbuckling ‘Praeludium’. Maybe there are hints of Anton Bruckner in the deeply felt ‘largo.’ It comes as no surprise that Reger ends his Suite with a ‘fugue.’ This massive construction balances what is really a perpetuum mobile with a few more reflective episodes and massive ‘final entries’ and coda. Surely, no ‘Old Suite’ had so many chromatic notes and chords. I do not know why Reger gets written off as boring, academic and downright dull. This is proof that there is another side to this composer: witty, puckish, straddling the musical boundary between Brahms and Schoenberg and featuring a deep absorption of Bach. Well played here by the duo, despite one of two intonation issues, but so what! Great music.

Sergei Prokofiev's Cinq Mélodies were written during his exile in Paris during the 1920s. They are an arrangement of songs ‘he had composed earlier.’ Not normally a fan of Prokofiev, I found these five pieces urbane, full of interest and often quite moving. Holst and Merrick give studied performances of this deeply lyrical music.

What first struck me about this four-CD conspectus was the documentation. The liner notes present a detailed 10,000-word essay/biography of both artists written by the Founding Editor of MusicWeb International, Rob Barnett. This will inspire the historically minded in further exploring many facets of contemporary musicianship. The biography is preceded by a context-setting introduction, which explains that many of the works heard in this set, were well and truly out of fashion in the 1960s.
For example, Bax’s reputation was then based on Tintagel and The Garden of Fand. On a positive note, Iris Loveridge had recorded her ground-breaking cycle of Bax’s piano music for Lyrita (1959-63). Now, through the age of LP, CD and streaming, it is possible to find several versions of Bax’s Legend, Ballad and Violin Sonatas, but Holst and Merrick were the pioneers in every case.

Nimbus were lucky in having the programme notes for virtually all these works. They were issued as part of the Frank Merrick Society/Rare Recorded Edition LPs. Many were written by Merrick, with two (Rubbra and Stevens) provided by the composers themselves. They are model notes that err on the technical, rather than the descriptive, model more popular today. But they are perfectly comprehensible to anyone who has a moderate understanding of musical theory. They make for fascinating reading, especially if one has the score at hand.  I was unable to find the note for Bax Sonata no.1: the text seems to jump from the Ballad to no.2! And nothing about the Prokofiev Cinq Mélodies either.

The final piece of editorial information is the ‘Note on the LP Sources.’ Listeners need to understand that the original records were made for private listening. The Merrick Family suggest that less than 100 copies of each LP were pressed.  In total there were some 24 numbered releases, with 20 issued by the Merrick Society and four by the Rare Recorded Edition (RRE) and Cabaletta. A further 17 volumes were issued by RRE including the nine-volume edition of the ‘complete’ piano works of John Field. The recording dates of each work are not given, although the ‘source LP’ is cited (see above).

I guess that relatively few people will purchase this set to have pristine recordings of these important works. They are quite clearly historical and reflect the fact that they are around 50-60 years old. Listeners who wish to explore virtually the entire corpus of the Holst/Merrick discography will be delighted. And they are essential listening for all enthusiasts of Arnold Bax.