J.S. Bach: Some [Very Unoriginal] Thoughts on the Chorale Prelude ‘Der Tag, der ist so freudenreich’ (The Day is Full of Joy) BWV 605

Every Christmas I listen to certain works that have become old favourites. For me, they are a part of my Yuletide‘tradition.’ I will listen to Gerald Finzi’s In Terra Pax, Ralph Vaughan Williams’s Hodie, and over a few days, J.S. Bach’s monumental Christmas Oratorio. This list does not include the many carols I will hear in church, on the radio and in the shops. And then there are the popular songs that are trotted out each year. These traverse the repertoire from Bing Crosby to Slade and from Leroy Anderson to Wizard. All memorable stuff.

This year I have decided to listen (with attention) to the Christmas choral preludes from Bach’s remarkable Orgelbüchlein. For this blog post I have picked out my favourite seasonal number: ‘Der Tag, der ist so freudenreich’ (The Day is Full of Joy) BWV 605.

Now, there has been much commentary on the Orgelbüchlein in general and also the individual chorale preludes. This ranges from the technical to the single sentence on a record sleeve. The definitive example of the former category is Peter Williams’ The Organ Music of J.S. Bach (Cambridge University Press, 1980, 2003). No lover of Bach should be without this and its companion volume. An example of the former writing for this present prelude is ‘Notice…the overwhelming joy of BWV 605…as conveyed by the exuberance of the rhythmical interplay…’

First, some words about the Orgelbüchlein itself. The Orgelbüchlein (Little Organ Book) is a collection of relatively short organ works by J.S. Bach. Albert Schweitzer calls it ‘the lexicon of Bach’s musical speech’. It was originally conceived by the composer to include 164 preludes based on 161 hymn tunes used by the Lutheran Church on ‘high-days and holy-days’ during the Church’s Year. It is to be eternally regretted by organ enthusiasts that he only completed 46 of these pieces (BWV 599-644). Bach abandoned the project when he was appointed to the Court at Köthen. The Orgelbüchlein served (and serves) a dual function – for liturgical use and as a ‘primer’ for organ students. The British organist James Lancelot remarked that Bach’s Orgelbüchlein ‘has become the organists bible’. He further suggests that ‘no organist should be ignorant of the collection and every organist should master some, at least, of these chorales which have adorned the liturgy of churches throughout and far beyond Lutheran communities’. The Orgelbüchlein features largely chorales from the first half of the Christian year – Advent to Whitsun. As noted, they are short. The chorale is typically presented in the right hand ‘treble’ part and does not have ‘interludes’ between the sections of the tune. The ‘added value’ of these chorale preludes is found in the registration, the harmonization and the embellishment with musical ornaments.

Turning to ‘Der Tag, der ist so freudenreich’ BWV 605. The melody for Bach’s chorale was based on the plainsong ‘Dies est laetitiae in ortu regale’ (Royal Day that chasest gloom!) which dated back to the 14th century. Both melody and text were first published in 1529: 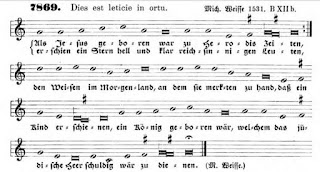 Bach also used this melody in BWV 719, a chorale prelude which is part of the Neumeister Collection. This was ‘rediscovered; by Christopher Wolff et. al. the in Yale Library. It contained 82 chorales by several composers including Pachelbel, Walther and J.C. Bach. There are some 38 chorale preludes by Bach, although a few of these are also attributed to Pachelbel and Walther.
‘Dies est laetitiae’ was harmonised in four parts by Bach in BWV 294:

‘Der Tag, der ist so freudenreich’ (The Day is Full of Joy)
O hail this brightest day of days,
All good Christian people!
For Christ hath come upon our ways,
Ring it from the steeple!
Of maiden pure is He the Son;
For ever shall thy praise be sung,
Christ's fair mother Mary!
Ever was there news so great?
God's own Son from heaven's high state
Is born the Son of Mary!

This day the wondrous Child is born,
Lent to earth from heaven.
He comes to cheer a world forlorn,
Its heavy sin to leaven.
So, sing ye all the glorious birth
Which doth redeem our fallen earth,
And works our salvation.
Laud to Thee, Child Jesu Christ!
With mankind Thou'st kept the tryst
Thou Star of every nation. 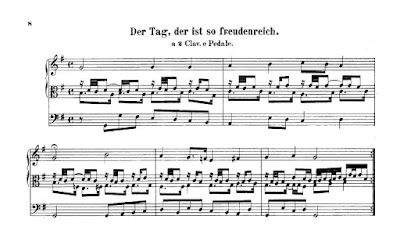 The chorale prelude is ostensibly written in G major. There are a few chromatic notes. However, there is a tendency for the tune the harmonisation to explore the G mixolydian mode expressed through several F naturals in the entire prelude, including one in the melody itself. This gives a flavour of the ancient ecclesiastical mode.
The melody, for the right hand, is written in the ‘treble’ part, and is played on a ‘solo’ manual. I think that this should ideally be a reed stop, however it would also be effective on choir or great flutes. The left hand plays interesting motives, which are cleverly split into two parts or voices. These are played as ornaments. This figuration is upheld until the conclusion of the prelude. Registration for the left-hand music includes foundation stops 8ft, 4ft and 2ft. It would be possible to include a ‘quiet but scintillating mixture.’ The pedal presents a ‘firm quaver’ part.

The great German scholar Julius August Philipp Spitta (1841-1894) in his Johann Sebastian Bach: His Work and Influence on the Music of Germany, 1685–1750 (1873/1880) stated that ‘The Christmas melody ‘Der Tag der ist so freudenreich’ is beautified by a joyful soaring rhythm…’. Harvey Grace (The Chorale Preludes of J.S. Bach, 1922) has written that ‘The [accompaniment] figure is used…to express the joy of confidence in the Divine goodness, and its rhythm is the main feature in [this] gay prelude…the gaiety, by the way, comes out only when the piece is played very quickly and cleanly.’
I wonder if this prelude ought to be taken a wee bit slower than Grace suggests. By doing so, it is possible to create a numinous atmosphere that reflects Keller’s (The Organ Music of J.S. Bach, 1948) contention that the left-hand part imagines the ‘rocking cradle’ at the nativity.

For me, Bach’s chorale prelude ‘Der Tag, der ist so freudenreich’ BWV 605 epitomises the Christmas season and its message. On the one hand, there is the intimate mystery of Jesus’s birth in the mean stable in Bethlehem and on the other, the joyful announcement of the Incarnation of God made Man.  All this profound symbolism, truth and wonder is contained in less than two minutes worth of music.

A good example (if a little fast for me) of ‘Der Tag, der ist so freudenreich’ BWV 605 can be heard on YouTube. Olli Porthan plays on the Verschueren organ (1994) at Sibelius Academy, Helsinki, Finland.