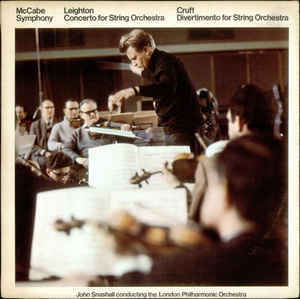 Performance and Score Reviews
Kenneth Leighton’s Concerto for String Orchestra op.39 was first p
erformed at the Wigmore Hall, London on 19 June 1962. Harvey Phillips conducted the Harvey Phillips String Orchestra. The first section of the concert also included a Concerto for Strings by John Stanley, edited by Gerald Finzi. This was followed by Sir Edward Elgar’s ‘delightful’ Serenade for Strings in E minor, op.20 (1892). After the interval, Jennifer Ward-Clarke (1935-2015) was the soloist in Boccherini’s Cello Concerto in B flat.  The concert concluded with a performance of Jean Françaix's (1912-97) urbane Symphony for String Orchestra (1948). Françaix had celebrated his fiftieth birthday during the previous month.

The Times (20 June 1962) suggested that Leighton’s Concerto for String Orchestra ‘made a distinctly favourable impression.’ The unsigned reviewer (possibly William Mann) considered that the ‘grave beauty of its opening movement generates a throbbing rhythm which rises to an impassioned climax’, followed by ‘the scherzo-like middle movement [which] is played pizzicato throughout’ and the ‘finale, beginning in slow march time’ and presenting ‘much strenuous but rewarding contrapuntal writing.’ He concluded by noting that it was ‘refreshing to hear a work by a comparatively young composer in which strong feeling is expressed with skill.’  The ‘youth’ of the composer is overstated: Leighton was 32 years old when the work was composed.
R.L.H. writing in the Daily Telegraph (20 June 1962) was less-than-impressed with the general performance by the Harvey Phillips String Orchestra: ‘…[the] full, warm string tone’ was ‘…[usually a] feature of the orchestra, however he considered that ‘they rarely made full use of this basic strength.’ The playing was marked by ‘faulty ensemble’ and a ‘lack of rhythmic precision and a failure to shape the music constructively.’ The reviewer considered that the ‘orchestra played…most convincingly in [Leighton’s]…sombre, passionate Concerto…’

The Edinburgh-based newspaper, The Scotsman (20 November 1964) reported on a performance of the Concerto for String Orchestra on 19 November 1964 at the Reid School of Music, Edinburgh. Conrad Wilson states that the work was ‘refreshingly clear cut, laying out its argument sharply, concisely, and with impressive effect’ and considered that it was ‘a stirring, powerful piece.’ Apparently, the work was repeated at the same concert.  Interestingly, Wilson states that the work was dedicated to Harvey Phillips. This is not supported in Carolyn J. Smith’s Bio-Bibliography of the composer (2004), the Chandos (CHAN 10461) liner notes or the thesis on Leighton’s early music by Adam Binks (2007).

The score of Kenneth Leighton’s Concerto for String Orchestra was published by Novello in 1965: it was reviewed by Hugh Ottaway in the Musical Times (July 1965). He considered that the work displayed ‘…a fine professionalism’ and specifies the ‘…excellent handling of resources…’ He remarks that although Leighton is ‘not a composer of immediately striking individuality [he] has a keen imagination of a kind that imparts relevance and force to each successive step his music takes.’ Ottaway concludes his review of the score by noting the combination of the ‘closeness of composition with an expansive energy that sweeps the music forward surely and vigorously.’
To be continued…
Posted by John France at 06:00