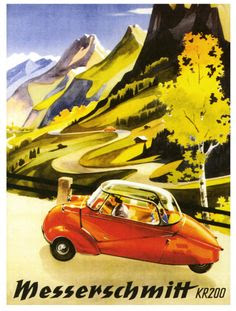 Perhaps the most frightening road journey I ever made was from York to the nearby village of Strensall – in a bubble car. In fact, if I remember correctly it was a BMW Isetta 300, which had been built sometime in the early 1960s. It was not so much the speed that bothered me, it was being so close to the road and not having any protective bonnet in front of me that scared the wits out of me. The term ‘bubble car’ is quite subjective. It is rarely heard these days, but I assume that it can apply to any ‘small, economical microcars.’ Marques included Isettas, BMWs, Messerschmitt’s and the Isle of Man built Peel Trident.
The composer Felton Rapley (1907-1976) has caught the mood of a journey in one of these ‘classic’ cars in his short character piece ‘Bubble Car.’ I am not sure when it was composed, but the only available recording was made 1962 by the Telecast Orchestra, conducted by Charles Williams.
The bubble car was a bit of a nuisance on British Roads: I understand that it was banned from the burgeoning motorways in the 1960s. The music presents a somewhat skittish mood, that well reflects the car’s progress at a speed no greater than 56mph. I guess that the bubble car is a little bit of an icon of era, however I understand that classic car enthusiasts have several ‘owners’ clubs’ dedicated to their preservation.

Felton Rapley was an ex-chorister of Winchester Cathedral and was well-known as a church and a cinema organist in Epsom. Latterly he worked for Chappels and had a lot of music published by that firm. He divided his compositional time between writing organ music, light music and educational pieces. According to Phillip Scowcroft, Rapley’s best known work was Portrait of Clare based on Schumann’s song ‘Devotion’.  One of my favourite scores from Rapley’s pen is the nautical Overture: Down the Solent. This present piece was written under the pseudonym of Peter Barrington.


Listen to Felton Rapley’s ‘Bubble Car’ on The Golden Age of Light Music: Fiddles and Bow (GLCD 5201). At the time of posting, it is also available on YouTube.
Posted by John France at 06:00