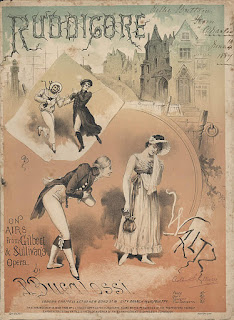 I have always had a soft spot for Gilbert and Sullivan’s opera Ruddigore. The performance given at Coatbridge High School in 1968 was my first introduction to G&S, the first time I heard an opera on stage, and my first experience of amateur dramatics. I have written about this in another post.
The pianist Leslie Howard was the most appropriate person to devise the 'Ruddigore Fantasy’. He had recently completed a massive survey of ‘Liszt at the Opera’ on Hyperion Records which was issued on six 2-CD volume. All the Operatic Fantasies, Paraphrases and Transcriptions were explored.
In the nineteenth century, it was a common entertainment for concert pianists to improvise on popular tunes from operas and song albums. It was from his extemporisations that Liszt developed his operatic fantasies. They typically showcase the pianist’s virtuosity whilst presenting a pot-pourri of the best bits of the opera. Liszt’s most successful fantasies included those on Charles Gounod’s Faust, Mozart’s Don Giovanni, Verdi’s Rigoletto and Rossini’s William Tell.

Leslie Howard’s ‘Ruddigore Fantasy’ was commissioned by John Farmer for Ruth Ann Galatas. It was completed in 2005. Howard gave the first performance at a charity concert in the Royal Brompton Hospital (London).
The liner notes of the CD recording explain that the title is ‘in homage to the early operatic fantasies of Liszt, and is conceived as a continuous suite incorporating variations and transcriptions of several themes from Sullivan’s … Ruddigore or The Witch’s Curse.’
Enthusiasts of G&S will spot the melodies and allusions in this piece. The opening reflects the chorus of the ancestors explaining the terms of the Ruddigore curse to Sir Ruthven Murgatroyd. This is followed by one of Sullivan’s masterpieces: the powerful and scary ‘When the night wind howls in the chimney cowls.’  Rose’s song ‘Farewell, thou had my heart’ from the finale of Act 1 followed by the ubiquitous Bridesmaids chorus ‘Hail the bridegroom, hail the bride!’ calm the mood a little. I particularly enjoyed the transcription of the ‘patter-trio’ from Act 2 – 'My eyes are fully open' with its humorous repetitions of ‘it really doesn’t matter, matter, matter, matter, matter’. A backward glance to some earlier melodies brings the work to a satisfying close.
Classical Source writes that Howard’s ‘take’ on Ruddigore ‘begins with Liszt in B minor, and like Howard’s great hero, this Fantasy is full of enterprise and theatre, very Lisztian in fact, and with a full quotient of familiar Arthur Sullivan tunes. Rest assured that with playing of this quality, Howard’s Fantasy is exactly as its creator wishes it to be.’
Peter Dickinson reviewing Leslie Howard’s performance of the Ruddigore Fantasy on the Malcolm Smith Memorial Album in The Gramophone (March 2015) suggests that ‘whether you know the opera or not, the tunes are good.’