More Light Music from Guild - music While You Work IV 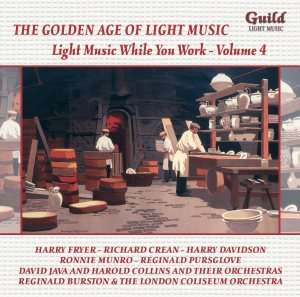 I seem to have missed the first three volumes of this collection of ‘Music While you Work’ (MWYW). However, I get the general idea. I used to sit and listen to the eponymous radio show on the Light Programme with my grandmother.

This was 1966 and I guess this style of this music acted as a good counterweight to my usual diet of ‘pirate’ radio stations. Not quite as rebellious, but at least it gave me a lasting love of Eric Coates.   When I first began gainful employment with a ‘summer job’ in the 1970’s I worked for a short while in a factory as a labourer. I remember chatting to one of the staff, a lady in her fifties, who told me about the factory broadcasts ‘during the war.’  She had worked assembling radios for the army.
The programme was broadcast twice daily from June 1940 – which was just after Dunkirk and just before the Battle of Britain got underway. The series was to last until September 1967.  The original ethos of the programme was to include only popular or light music with the hope that the steady rhythms would encourage the factory workers to be more productive. The music was non-stop with no announcements. The show began and ended with Eric Coates ‘Calling all Workers.’
However, the project did not stop there: there was a spin off.  Decca ‘Music While you Work’ records first appeared in 1942 as 78rpm discs. The last ones were issued in January 1947.  This was part of a ‘hush-hush’ wartime project to produce music that could be played over the public address system in the factories. There were eventually some 400 discs in the catalogue.
Apparently, a wide variety of music was recorded including dance bands, jazz and various instrumental ensembles – however the present CD concentrates on what is generally considered to be ‘light music.’
The CD Liner notes point out the series was soon deleted and suffered from bad publicity. Apparently, the record buying public were largely unaware of what was available.  One interesting feature was the use of ‘full frequency range recording’ in the production of the records –this led to a much-improved sound quality.

The CD opens with a fine medley of ‘martial’ songs including such delights as ‘The Tin-Can Fusiliers’ and ‘When a Soldier is on Parade’. Harry Fryer and his Orchestra were stalwarts of the MWYW programmes and recordings. Included is the excellent ‘Rhythmic Paraphrase’ on Bizet’s Carmen.  This seems to have been a hit for Harry as there is also a one based on Charles Gounod’s Faust.  Ronnie Munro and his Waltz Orchestra  give sweeping accounts of some of Johann Strauss Jr’s best loved waltzes  including ‘Roses from the South,’ the delightful ‘Voices of Spring’ and the ‘Artists Life’. However, Munro does not restrict his interest to Strauss. The ‘Danube Waves’ are recalled in Iosif Ivanovici’s attractive waltz and Emile Waldteufel’s less well known ‘Les Sirenes’ is given an airing.  And I love his ‘um-pa-pa’ performance of Erensto Becucci’s ‘Tesoro Mio’ (My Treasure).

Two Eric Coates numbers are included here. Richard Crean and his Orchestra play ‘In a Country lane’ and ‘At the Dance’ from the Summer Days Suite. Both these numbers are perfect evocations of the ‘things we were fighting for’ – a Britain that existed, but for most people only in the imagination. They are beautifully played, however I hope I may be allowed to add here that I do like my Coates played by a full ‘symphony’ orchestra.  Another piece in the Crean listings is Gabriel Marie’s ‘La Cinquantaine’. The title means ‘The Fiftieth’ and possibly refers to a wedding anniversary. This tune, which was originally scored for cello and piano is ‘sweetly romantic and is signed to be played ‘in olden style.’  It is given all sentiment here.
Harry Davidson and his Orchestra are well represented on this CD.  Abe Holzmann’s ‘Old Faithful’ is one of those tunes that you seem to know, even if you cannot name it. Archibald Joyce’s ‘Vision of Salome’ is a restrained waltz: there is nothing here to inflame the passions. This is not Richard Strauss’ ‘Dance of the Seven Veils’ – but something very prim and proper. It was not John the Baptist’s head on a plate here, but an Egg and Cucumber Sandwich. ‘Tick of the Clock’ by James Perry is a little novelty piece –with another of those tune that you have always known. Paul Linke is a name that often crops up in the world of light music. He was a German composer/conductor who is perhaps best remembered for his ‘Berliner Luft’ from his operetta Frau Luna, and ‘The Glow-Worm’ from Lysistrata. Harry Davidson plays his ‘Amina – Intermezzo’, which is wistful and gentle.  Abe Holzmann is represented again with his jaunty march ‘Yankee Girl’.
Harold Collins and his Orchestra play a rather eccentric little number by George Blackmore called ‘Knuckledust.’ Now I am not quite sure what to make of the title. What is Knuckledust? Let’s hope it has nothing to do with Knuckledusters! Archibald Joyce was known, as ‘The English Waltz King’ or ‘The English Waldteufel’ such was his popularity duding Edwardian times. Collins performs the well-known ‘hesitation’ waltz called ‘Dreaming’: it is actually more wistful than a reverie.

David Java seems to be little-known in light music circles: his career is ‘poorly documented’ Apparently there are only four ‘sides’ recorded by him for the Decca MWYW series – two are presented here – ‘Love Dance’ which is an old-fashioned’ intermezzo from the vaudeville musical  Madame Sherry (1910) composed by a certain Karl Hoschna. The other is Jonny Heyken’s ‘Heyken’s Serenade No.2. I winder what happened to No.1?
Two loose ends are the offerings from Reginald Pursglove and his Orchestra and the London Coliseum Orchestra. The former is an attractive little dance number called 'Lonesome and Sorry' by Benny Davis and Con Conrad. The latter is a called ‘Waldmere’ and is a little foursquare in its working out but enjoyable all the same.

Once again, Guild has come up trumps with this fine new release. As always the sound quality if perfect. In fact, many of these recordings sound better than ones made later. This may well be to do with the ‘hush-hush’ ‘full frequency range recording’ mentioned above. The liner notes are extremely helpful and put all the music and the artists into context.
I noted above that there were 400 records in this series. Assuming two numbers on each disc, that is 800 tunes. There are 25 tracks on this CD. Four have been released in the MWYW series. Therefore, that leaves only another twenty- eight volumes to conclude the complete survey of the entire run of these Decca ‘Music While You Work’ records. Guild, keep them on coming!


The Golden Age of Light Music : Light Music While You Work- Volume 4
Guild Light Music GLCD5198
With thanks to MusicWeb International where this review was first published.
Posted by John France at 06:00