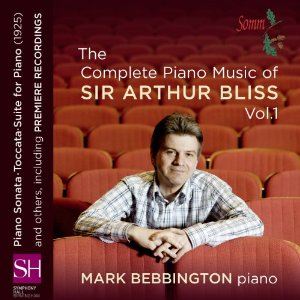 A great place to begin this excellent exposition of Sir Arthur Bliss’ piano music is ‘May-Zeh’. Hardly the most profound piece on this CD, it is nevertheless a well-crafted little number that balances a nod at the prevalent ‘salon music’ of the pre-Great-War years, but retains a subtlety and technical content beyond most examples of this genre.  It is the earliest work (1910) on this CD, the composer’s first surviving work for the piano and is also a premiere recording.
Arthur Bliss is hardly well-known for his piano music. Most folk approaching his music will do so through one of the larger pieces such as the Colour Symphony, the choral work Morning Heroes or perhaps the film score to Things to Come.  However, any study of Bliss’ catalogue shows a huge variety of music written in virtually every genre – from the opera The Olympians to a Fanfare for Macclesfield and from the ballet score Miracle in the Gorbals to the magnificent Viola Sonata, he has created works that are impressive, worthy and often touched with genius.  Yet his piano music remains a closed book. There are more than twenty work listed in addition to two piano concertos.  There is plenty to explore.

Where the quantity of recordings of Bliss’ piano music have been few and far between, the quality has been excellent. Two major releases appeared some 21 years ago on the Chandos label. Kathron Sturrock (CHAN8770) chose to couple the Viola Sonata (viola played by Emanuel Vardi) with a selection four important works: Masks, Triptych, Two Interludes and the Toccata. The same year Philip Fowke (CHAN8979) released a major selection of music including the then unrecorded Suite for Piano, the Sonata, and a number of smaller works, including premiere recordings of Das alte Jahr veergangen ist, the Study (1927) and the Miniature Scherzo.
Mark Bebbington, under the auspices of SOMM Recordings has set out to record all of Bliss’s music for piano. The present disc is the first of two volumes and includes three premiere recordings, which will be mentioned in due course.

The second work chronologically presented on this CD is the serious little Intermezzo: this inward-looking music is not like the typical examples of the genre being composed at that time. The liner notes suggest that it may have been a rejected movement from the first ‘Suite for Piano’, which was composed in 1910 and published in 1912. The Intermezzo was the composer’s second published work.

One of the important ‘discoveries’ on this CD is the Valses Fantastiques. The listener will not be surprised to learn that these ‘cool’ pieces were written some years after the publication of Maurice Ravel’s Valses nobles et sentimentales.  Bliss’ score is prefaced by a quotation from John Keats’ ‘Fancy’ – Break the mesh /Of the Fancy’s silken leash [/Quickly break her prison-string.’]. The poet may have used symbolism to suggest that ‘Fancy’ was a bird who needed to be set free. Whatever the literary background to this poem, Bliss had created a delicious sound world that is at once attractive and moving. All four ‘Valses’ are well-written and make use of a neo-romantic sound world. They are a million miles away from some of the composer’s ‘bad-boy’ experiments that were to follow.

Listeners are on territory that is more familiar with the three works composed during the 1920s. The Toccata is a Stravinskian extravaganza.  It was composed in 1925 after the Bliss’ return to London from his sojourn in California and is dedicated to his wife, Trudy.  It is in a completely different sound world to the foregoing pieces and owes much to Scriabin and Prokofiev as well as Stravinsky. The work is characterised by energy, drive and rhythmic complexities: there are hints of jazz and ragtime. This Toccata tests the virtuosity of the pianist to the limit: it is a wonder why this short piece is not a standard feature of piano recital encores.
The Suite for Piano (1925) is a major work. Forget any similarity between this piece and the countless ‘suites’ being written at that time by the Percy Elliots, the Eric Coates and the Alec Rowleys. [This is not to disparage these composer’s – I love ‘em all, but to note the serious intent of Bliss’ example]. It is virtually a piano sonata by another name. Four movements make up the massive structure of this piece and any of them can be performed separately. However, I do believe that they need to be heard as a group.  The Suite opens with an Overture, which hat-tips Bach at the beginning and occasionally during its progress but is then dominated by the rhythmic and dissonant mood of Stravinsky and Prokofiev.  The Polonaise is dark and menacing.  The heart of the Suite is the ‘Elegy’ that is prefaced by the dedication ‘F.K.B Thiepval 1916’, which refers to the death of his brother, Kennard, during the Great War. This is, not unsurprisingly, deeply felt music. Based largely on chords, there is a sense of timelessness about the exposition of the material in this movement. It is a subtle balance between, what Andrew Burn has noted, solemn and wistful music. This is one of the most moving pieces of music to come from Bliss’ pen.  The mood of optimism is restored with the impressive set of six ‘Variations’ which concludes the Suite.  Dissonance, aggression, movement and complexity are tied down to the prevailing sound world of the mid nineteen-twenties. However, there is a short return to sadder matters in the fifth ‘pastoral’ variation, before the work concludes in mayhem of harsh chords, wild syncopations and energetic cross rhythms. It is an important and very successful work.

The Study, which dates from 1927, was dedicated to the great English music critic Edwin Evans.  I agree with Robert Matthew-Walker when he contemplates what Evans would have thought about this piece with ‘its rhythmic uncertainties, its technical demands of diminished ninths and tenths and the juxtapositions of adjacent tonalities.’  Yet listening to this piece today one can enjoy the elusive balance between modernism and a certain romantic tinge.

The Piano Sonata is another massive, complex work. It was composed in 1952 when the composer had reached his 62 birthday: it was a ‘thank-you’ present for Noel Mewton-Wood who had championed Bliss’ Piano Concerto.
It is fundamentally a serious piece that has a number of lighter moments. The emotional content of the piece is varied, but does tend to be profound.  Stylistically there is an excellent balance between advanced tonality and chromatic complexities and dissonant harmonies with some more relaxing chords. It has been suggested that the work is close in mood to Sergei Prokofiev’s Sixth Piano Sonata, which was composed in 1940.

The Sonata is conceived in three largely equal movements. The opening ‘Moderato marcato’ is fresh and forceful with occasional relief given by a lovely ‘cantabile’ melody. The slow movement is ‘slow and serene’ and once again epitomises Bliss’s ‘elegiac’ strain of writing. This profound music explores a narrow range of reflective moods. Bliss has characterised the third movement as being ‘gay and lively’. However, the coda is more aggressive and ends with a ‘fiery burst of sound.’
My liking of this work is largely predicated on the fact that the entire Sonata is a mature work that manages to balance modernity with a romantic and heroic mood that produces a unified and satisfying Sonata.

The latest work on this CD is the Miniature Scherzo dating from 1969.  It was composed to celebrate the 125th anniversary of The Musical Times. This very short work is based on a theme cribbed from Mendelssohn’s well-known Violin Concerto, which had been composed in the same year as the journal was first published.  The Miniature Scherzo is a terse little work that keeps the ‘quote’ closely guarded, however it is enjoyable and straight to the point.

The recording of this piano music is excellent, as is expected from SOMM. Robert Matthew-Walker has provided exceptional introductory ‘programme notes’ that situate these works into the composer’s career and give the listener all the information needed to enjoy these works.
The first volume of Mark Bebbington’s recording of Arthur Bliss’s piano music will be essential listening for all enthusiasts of the composer’s music. However, Bliss was not a parochial composer: he was popular in the United States where he made his home for a number of years. His music is often cosmopolitan and makes use of wide variety of modernist techniques as well as alluding to jazz and popular styles.  Therefore, the fan-base will be much wider than enthusiasts of British music.
It is not a case of deciding which recording is best – where Bebbington reprises repertoire from twenty-odd years ago. Both Sturrock and Fowke are essential listening. However Mark Bebbington brings his considerable experience of British music to bear on the entire repertoire recorded. One need only think of his stunning cycles of music by John Ireland, Frank Bridge and the Dale and Hurlstone Piano Sonatas. His playing is always concentrated, sympathetic and clear.


It is probably a wee bit of a cliché to say that I look forward to the next volume: however it would be true.