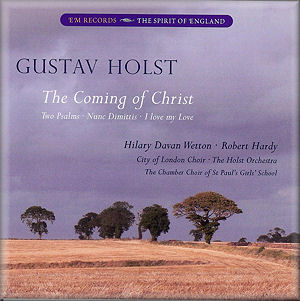 One of the highlights of British musical endeavour in 2011 has been the recording of Gustav Holst’s incidental music to John Masefield’s play ‘The Coming of Christ’. As the ‘blurb’ for the CD says:-
‘The Coming of Christ, by Gustav Holst, was commissioned in 1927 by the Dean of Canterbury Cathedral, George Bell, as a setting of a text by John Masefield, words and music together forming a Mystery Play reminiscent of medieval religious dramas. Although the work received its première the following year to critical acclaim, it was thereafter abandoned – until its resurrection at The English Music Festival in 2010; and it is here presented in recorded form for the first time’.
I found a review, written by Marion M. Scott, of the first performance at Canterbury Cathedral. The first performance was given on 28 May 1928. As Scott notes the Cathedral choir was supplemented by Holst’s pupils from Morley College and St Paul’s Girls’ School. The work was conducted by the composer. I shall post one or two contemporary reviews of this work over the Christmas Season.

One of the  most important recent artistic events has been the production in Canterbury Cathedral of John Masefield’s new play, ‘The Coming of Christ,’ with music by Gustav Holst.
Holst’s music consists of seven numbers, and has been written with masterly economy of means and maximum effect. For the opening, plainsong is employed. With the coming of the Kings this changes into a folksong idiom. Their procession is accompanied on a grand pianoforte off the scene. As the play is outside time this is not anachronistic, and serves the purpose of differentiating the secular music of the Kings from that of the Heavenly Hosts in which the organ is employed.
With the plainsong and the folksong elements in his score, Holst has interwoven a third, that of the chorale. A very beautiful Mixolydian [1] melody named ‘Hill-Crest’ (from Masefield’s house) [2] appears at intervals, and forms the climax of the whole work in the last scene, when not only the actors but all the audience join in singing the hymn to full instrumental accompaniment – far above- the pealing of the Cathedral bells.  The effect is overwhelming, the more so for the austerity of the earlier numbers. Following it, the Postlude for the solitary trumpeter should be wonderful, but in practice it was an anticlimax.
Yet aesthetically it was only at these points of beginning and end that Holst’s musical design coincided exactly with that of the play. In between the music moved on a steadily ascending plane to the one climax, while the play stood four-square. The difference in design has some advantages, but it induces an ulterior restlessness.
One would like to know the name of the clarion soprano who took the solos in the special choir which Holst brought from London to assist local musicians.
Marion M. Scott The Christian Science Monitor June 23 1928 (with minor edits)
With thanks to Pam Blevins who is currently preparing a volume of Marion Scott’s Musical Criticism

Notes:
[1] Mixolydian refers to the modal scale beginning on G of the white notes of the piano. F is not sharpened.
[2] John Masefield at this time lived at Hill-Crest, Boar’s Hill, Oxford.
Posted by John France at 06:00