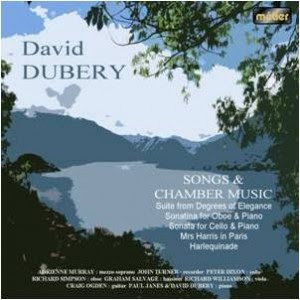 Until hearing this CD, David Dubery was a composer largely unknown to me. I had heard his short miniature Mrs Harris in Paris, but that is all. However, as a Manchester-based composer he appealed to me. It seems that so many great and good composers from that part of the world have been largely sidelined by the musical establishment. Think only of Eric Fogg, Thomas Pitfield, John Foulds and Alan Rawsthorne, to name but four.
It is not the place to give a comprehensive biography of David Dubery; however three things can be said. Firstly he was born in Durban in South Africa in 1948. In 1961 he came to his mother’s home town of Manchester. Secondly, from an early age he composed music and later studied at the Northern School of Music between 1964-1967. He has spent the intervening years working in the fields of music, stage and broadcasting. And thirdly, he works in a traditional musical language that is approachable, but sometimes demanding. He prefers to compose miniatures rather than large scale pieces, however amongst the songs and the chamber pieces there are a few musical theatre pieces such as Once upon an Ark and an American styled musical called Love Lines. Although there is no symphony (yet) there are a number of concerted works and tone poems.

The best place to start this fascinating musical journey is spending some time with Mrs. Harris [who] goes to Paris. This miniature for recorder and piano is subtitled Valse Temptation! The original work dates back to 1980 when the composer was working on a musical adaptation of the novel of the same name by Paul Gallico. Some of the music was reworked into the present ‘Parisian Waltz’ in 2003. Apparently the ‘temptation’ was not a man but a Dior gown! A lovely little piece to get to know the composer with.

I know that it is working backwards through the track-lisitng, but the delightful suite Harlequinade is a good place to continue our exploration. This was written in 2007 for the unusual combination of guitar and recorder. Just to recap, the name Harlequinade was given to the 18th century English adaptation of the Italian commedia dell’arte. There are four lovely, varied and balanced movements. The work opens with Pantalone’s Minuet which is a wistful (but with an occasional ‘edge’) little number with some really ‘Mediterranean’ moments about it. Pantolone was the greedy and ‘over-amorous’ father of the lovely Columbine. He tries to keep his daughter and Harlequin apart. The second movement, which is short, reveals her ‘gossiping and intriguing’. However, this is followed by Columbine’s Romance with Arlecchino (Harlequin). This is the heart of the work: a truly beautiful piece of ‘love’ music. The final movement is given over to Harlequin himself with a lively and vibrant dance –this includes a drunken moment from which everyone eventually sobers up. Altogether a great little suite that is totally in sympathy with its subject. However, I would prefer to hear the recorder part played by the flute: I understand from the composer that such an arrangement exists.

I would then move on to the short Walking Cimbrone written for bassoon and piano. It was inspired by a stray dog that ‘adopted’ the composer and his partner whilst they were visiting the Villa Cimbrone in Ravello. Dubery writes that the ‘dog was ... sad, comic and caused embarrassment at every turn. Certainly the present pieces matches Elgar’s Mina as a nice little character sketch of ‘man’s best friend!’ The piece was written for the bassoonist Graham Salvage.
Escapades also had Salvage in mind. These four short pieces were composed in 2008 for recorder, bassoon and piano. The musical idea is to present material as a conversation or dialogue between all three players. The suite has great variety, with an opening movement of considerable metrical change; the second is a bit hard-edged and has ‘oriental’ overtones. The third is a rhapsody of some beauty, whilst the final movement is a neo-classical dance.

As part of our wayward exploration of this CD it would be good to now examine some of the songs. A number of poets are represented including Hilaire Belloc, Jonathan Swift, Robert Graves, Douglas Gibson and Dante Gabriel Rossetti. Begin with the lovely ‘Remember’ by Christina Rossetti from her Goblin Market sequence. It is a well-wrought little song that expresses the brave sentiments of the poem. Certainly the last line is heart-breaking ‘Better by far you should forget and smile/than that you should remember me and be sad.’
The Four Songs for ‘medium voice’ are worthy additions to the repertoire of English lieder. The set opens with Douglas Gibson’s fine poem ‘Another Spring’. Gibson is a poet that I do not know, but his lines are a perfect example of pastoral poetry that nods to John Clare: it is sympathetically set by Dubery. Dante Gabriel Rossetti’s great metaphysical poem, ‘Sudden Light’ (I have been here before/but when or how I cannot tell) is the heart of the cycle. This is deep and thoughtful music. Things lighten up a bit with Swift’s ‘rollicking, colourful Irish characterisation, ‘Onyons’. The final poem is the favourite Belloc poem ‘The Birds’ – (When Jesus Christ was four years old/The angels brought Him little toys of gold). It is a setting that reflects the childlike simplicity of the words, but also notes the deeper thoughts hidden between the lines. It was the composer’s first published song in 1971.
There were originally another two songs in this group but these were set aside.

Move back now to instrumental music. The Two Stopfordian Impressions for recorder and piano were written for the redoubtable John Turner. For those not blessed with North-Country connections the adjective ‘Stopfordian’ applies to people and things related to the great Cheshire town of Stockport: pupils at Stockport Grammar School style themselves Stopfordians. David Dubery has composed two delightful and utterly poetic little numbers called Pinch Belly Park and The Glass Umbrella. The former is evocative of a winter’s day walk in the said Pinch Belly Park, which is the local name for Vernon Park. This is a little bit of minimalism that creates a chilly feel. The latter is a musical portrayal of the stunning Victorian market hall and St Mary’s Church bells. The work was composed in 2010. There is also a version for oboe and piano.

I have a problem with the Three Songs to Poems by Robert Graves: I really feel that the woodwind part does not add value. In fact, I believe that the tonal characteristic of the recorder jar or competes with the singer: it certainly does not complement her. I would rather hear this in a revised arrangement for piano and mezzo-soprano only. The songs themselves and their performance (the above comment notwithstanding) are absolutely beautiful – encompassing moods from the dreamlike ‘Under the Olives’ to the urbane ‘I will write’ which borders on jazz. The first performance of these songs took place at Prestwich Music Club in 2003.

After this move onto the Suite from Degrees of Evidence for recorder, oboe and viola. Not the set of pieces that most impressed me: they seemed just a little contrived. For one thing they are only four of six pieces that were originally conceived. They are based on a ‘chapter heading class 4, ‘intellect’ from Roget’ Thesaurus!’ I find them disjointed and largely unmemorable. Perhaps the version for String Quartet may be more impressive? There are four movements: ‘Memory’, ‘Certainty’, ‘Possibility’ and ‘Absurdity’.

Lastly, it is time to move onto the two most impressive, and possibly the most important works on this CD. The disc opens with the Sonatina for oboe and piano which is subtitled ‘Threesome for 2 players.’ This short work is in three clever and well-balanced movements which display the talent and technique of both oboist and pianist. From the opening bars of the ‘allegro vivace’ with its ‘quirky’ tune to the closing ‘cheeky’ passages in the ‘presto’ this work hold the interest both entertains and impresses. The middle movement, which is a little ‘moderato’ pastoral, is truly lovely and quite moving. This Sonatina is fresh, tuneful and a delight. It deserves to be in the repertoire of all oboists.

The masterpiece (in my opinion) on this present CD is the Cello Sonata. This work was originally conceived for double-bass and piano; however that work never came to pass. The Sonata was completed in 2006 and lasts for about eleven minutes. It is in three movements. This is lyrical work, that sits fairly and squarely the late twentieth century tradition of music that does not challenge the listener with issues of musical language, but certainly makes demands on their emotional engagement. The heart of the work is the deeply-felt ‘lento’ – which is both profound and moving. The composer suggests that this music was inspired by a tramp across the hills above Varenna, near Lake Como in Italy. However all is put to rights in the frenetic ‘energico’: apart from a brief respite, this is all movement and pace. The cello part sounds extremely difficult, with the pianist’s technique is pushed a bit too. The conclusion is ‘bravura’ to say the least.
This is an important Cello Sonata that must surely enter the repertoire. There is not a bar of this piece that is not interesting, enjoyable and satisfying.

All in all this is a great ‘retrospective’ CD of music by the Mancunian composer David Dubery. With one exception, I enjoyed every single item on this disc. Let us hope that over the coming years many other works from his catalogue find their way into the recording studio.