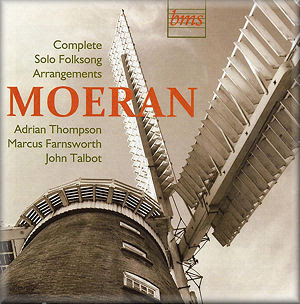 I agree with Rob Barnett when he says ‘that unadulterated folksongs do not in general hold my attention.’ That said, whichever way one looks at British music of the first half of the twentieth century this genre can be seen to be pervasive … or possibly corrosive, depending on one’s musical aesthetic. It manifested itself in a number of ‘rhapsodies’ often qualified by Constant Lambert’s dictum that ‘the whole trouble with a folk-song is that once you have played it through there is nothing much you can do except play it over again and play it rather louder.’ Or it could be the case that from Stanford to Britten composers have been keen to produce editions of indigenous tunes – be they Irish, Scottish, English or Welsh. Vaughan Williams is known to have edited over 800 examples; E.J. Moeran considerably fewer.


The present CD complements the recent release on Chandos of the ‘Complete Solo Songs of E.J. Moeran’, which consists of his ‘art’ songs, including his Housman and Joyce settings.
The first volume of folksongs arranged for voice and piano was the Six Folk Songs from Norfolk. This was published by Augener in 1924. The songs were collected in three villages in the County from performances by four local men. Two of the tunes collected, ‘Lonely Waters’ and ‘The Shooting of his Dear’ were to be used in orchestral compositions by Moeran.
Two things can be said about these folksong arrangements. Firstly the style of John Ireland is pervasive in the piano accompaniment. This is not a criticism, for it certainly adds value to the total effect of these songs. Secondly he approaches these songs with a lightness of touch often denied to similar compositions by Percy Grainger and Arnold Bax. For example ‘The Shooting of his Dear’ has an accompaniment that at times seems to be almost non-existent.


Six Suffolk Folksongs appeared eight years after the Norfolk set and were conceived as a companion volume. They were collected from two small villages, Earl Stonham and Coddenham. Geoffrey Self notes that they were ‘realised’ at Ipswich where Moeran was convalescing. These songs do not quite match the ‘out of doors’ feel of the Norfolk series. However, it is clear that they are an accomplished contribution to the genre: perhaps what is lost in spontaneity is made up in the subtlety of the combination of voice and piano?
The Songs from County Kerry set is a late addition to Moeran’s catalogue. These seven songs were composed in 1948 and turned out to be the composer’s last foray into the genre. The composer’s preface to this collection notes that: “These arrangements are taken from a much larger collection I noted in Co. Kerry at odd times during a period roughly between 1934 and 1948. They were sung by Kerrymen in Cahirciveen, Sneem and Kenmare. The verse by verse variants in some of the tunes are exactly as I heard them from the singers themselves on a number of occasions.” Certainly it is possible to agree with Geoffrey Self that these seven songs represent ‘a mature approach and [a] masterly touch rarely reached in the earlier sets.


This CD also includes a number of standalone folksong settings. These include the well-known ‘The Sailor and Young Nancy’ with its chorus sung by a male voice choir. The recording also presents the ‘pseudo-folksong’ ‘The North-Sea Ground’ which may have been composed for the Oxford and Cambridge Musical Club. Yet it is a fun piece that deserves its place in this collection. Performers should note that the group of ‘miscellaneous’ numbers would make a good sequence of songs at any recital.
The liner-notes for this BMS CD release are superb – in fact they set a standard that many other writers should aspire to. The essay by Roy Palmer of the English Folk Dance and Song Society is divided into two complementary sections – Moeran as ‘collector’ and Moeran as ‘composer/arranger’. There is a separate essay by Ian Maxwell on the recently re-discovered song ‘The North Sea Ground’. Alas, space has not permitted the reproduction of the texts for these 26 songs. However, the BMS have thoughtfully provided a .pdf file on their website. These texts make fascinating and enjoyable reading in their own right. My one concern is the epithet ‘complete’. There is always one ‘trainspotter’ that finds the exception that proves the rule. In this case it would appear to be ‘O Sweet Fa’s the Eve’- which is listed in Geoffrey Self’s catalogue listings for Moeran’s ‘folksong arrangements’. Now, I guess the reason is that the words are not ‘anon’ but are by Robert Burns and the tune would appear to be an Old Norwegian one. Fortunately, it is available on Moeran: The Collected 78rpm Recordings with John Goss as the soloist.


Yet this is an insignificant complaint against this excellent collection. I enjoyed the singing by the two soloists, the Weybridge Male Voice Choir and the piano accompaniment by John Talbot. I have a preference for Marcus Farnsworth’s vocal style but Adrian Thompson gives a good account of the nine numbers he is billed to sing. Every word is clearly enunciated and the sense of each song is easily understood.
There is, I believe an excellent strategy for listening to this CD. It has to be recalled that much of Jack Moeran’s (and other composers’) folksong collecting was done in public houses. The first thing is to find an appropriate bottle of beer – Adnams' Oyster Stout for the Suffolk Songs, Woodforde’s Wherry for the Norfolk examples and Clanconnel Brewery's McGrath's Irish Red for those from County Kerry. Like the beer, these songs need to be approached slowly and with considerable respect. Listen to them in the order given in the track-listing. However, I would suggest keeping the ‘miscellaneous’ song group till last. Even without the ale, these songs will reveal their charm only if sampled slowly. Any attempt to ‘binge’ may put the listener off them for good.
These are typically well-wrought realisations of a part of the British Heritage that was dying out rapidly in the first few decades of the Twentieth Century. We should be grateful to the many enthusiasts for their assiduity in saving these songs before they disappeared forever. In spite of Jack Moeran’s often haphazard methods of noting, documenting and filing the material he collected, these 26 songs are a testament to his skill as a composer and as a musical antiquarian. It is the tension between these two occupations that makes these songs interesting, perfectly satisfactory and ultimately moving.