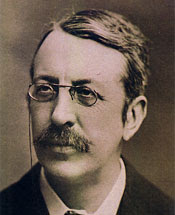 Further to my short post about Stanford's First Symphony having an airing on Classic FM I am 'reprinting' part of my review of the Naxos recording of this work.
I first became aware of British symphonies when I heard Vaughan Williams’ Sea Symphony. It was not long until I discovered that he wrote another eight. It was but a short step to hearing the symphonic works of Walton, Elgar and one or two from the pen of Bax. Naturally I read a lot about music in those early days, and soon came to realise that there were many such works locked away in the musical vaults. These included the symphonies of Charles Hubert Hastings Parry and Charles Villiers Stanford. However, any reference to these works was always qualified by the epithet – ‘dry as dust’. Moreover, perhaps more damningly, it was insisted that they were pale reflections of the music of Johannes Brahms. Of course, as a neophyte, one believes whatever learned musicologists tell you. It was not until I heard a recording of Sir Adrian Boult conducting Parry’s Fifth Symphony that I pricked my ears up. This was a work worthy of hearing. It may not be as great as Elgar’s Second, but it was still a fine piece of music, full of vitality, depth of emotion and good tunes.

A few years later, Chandos embarked on an ambitious scheme to issue the complete Symphonies of both Parry and Stanford. By that time, I had heard Stanford’s Irish Symphony – so I was ready to give these two cycles a chance. They were issued at a time when vinyl was giving way to CDs so I ended up having to buy most of them twice! Nevertheless, they were worth it. After a couple of years the issue was complete – not only all of Parry’s and Stanford’s Symphonies, but also the latter’s Irish Rhapsodies, the Second Piano Concerto and his Clarinet Concerto. It was a magnificent achievement. However, I truly believed that it was a one-off adventure. Buy now, or regret not having them in your collection for ever! However, that was before MP3 – the original Chandos recordings are now available for download. And then, a couple of years ago, I was surprised that Naxos, with David Lloyd-Jones, had decided to embark on another cycle to complement Vernon Handley and the Ulster Orchestra.

It would be easy to apply a kind of progressive aesthetic and write off Stanford’s symphonic achievement as being retro and therefore worthless. It is all too easy to detect echoes, and loud ones at that, of the music of Felix Mendelssohn, Robert Schumann and Johannes Brahms. It would be simplistic to suggest that Stanford is no Mahler or Bruckner or Elgar, pushing the boundaries of post-romantic music to its limits. It is much better to try to understand and enjoy these works as they are. Stanford is a consummate craftsman - he understands the formal principles of the symphony better than most and he develops some very subtle approaches to the various so-called ‘standard movement forms’. There is certainly nothing predictable about his music.

The First Symphony in B flat was written in 1876 and was entered into a competition run under the auspices of the Alexandra Palace. It was deemed so successful that it won the second prize. The first prize went to the now long-forgotten composer Francis William Davenport. John F. Porte writes, "The judges were the once famous [George] Macfarren, now deemed a musty academic, and Joachim, the famous violinist. There were thirty-eight symphonies submitted.

Stanford’s work was not performed until some three years later. It was never published and was not given again in the composer’s lifetime. However, there is no doubt that the work was successful and did something to draw attention to the twenty-four year old composer."

The Symphony No. 1 is quite long, lasting for more that forty minutes. Naturally with any work of this length there are issues of maintaining the listener’s interest. In this case I believe that Stanford manages to achieve this – with one proviso. Many people hearing this work will assume either that the rumours of his style are true – and they will expect to be bored. Or else they will expect a late-romantic work and be disappointed. Either way there is a danger that fatigue will set in. I guess the true approach to this work is to see it in the trajectory from Beethoven, Mendelssohn and Schumann and treat it as a kind of extension of these three composers. Of course it is no ‘Fifth’ or ‘Ninth’ but I feel it compares well with Mendelssohn and he should certainly not allow Schumann to make him feel embarrassed.

The long opening movement is probably unique in British music prior to Sir Edward Elgar – most especially for its length. There are so many ‘lost’ and ‘hidden’ British symphonies from that period - including the other thirty seven that were entered for the competition – so who really knows? I find this music totally satisfying and from the opening slow introduction into the ‘allegro’– the contrast between themes and sections avoids any possible lack of interest. The principal theme and the second subject seem to complement each other in music that is at times reflective and sometimes decisive.

The second movement is hardly a traditional scherzo – it is signed ‘In Landler Tempo’ which suggests an ‘intermezzo’ rather than more robust or witty music. It is not ground-breaking stuff - but both the formal and the instrumental balance reveals this as well thought out music that is both captivating and suave. Stanford contrasts the main theme with two fine trios.

Like a number of Stanford’s Symphonies, the slow movement is probably the heart of this work. Yet this is not some great meditation on the meaning of life – more a reflection on a young man’s dreams. Here and there the careful listener may detect hints of Irish folk-song and a general feel of the Emerald Isle rather than the banks of the Rhine. Look out for the use of the solo violin towards the end of the movement.
The ‘Finale’ manages to combine drive and momentum with a more pedantic, but thoroughly enjoyable fugal passage. Here Stanford makes expert use of the brass. This is an exuberant and exciting end to what was surely a superb First Symphony.
With thanks to MusicWeb International where this text appeared as a review of NAXOS 8.570356
Posted by John France at 06:00

I've enjoyed listing to both Stanford's 3rd Symphony and also the 1st String quintet, especially when he pulls a folksong out of his hat in the last movement of the quintet.

I did a search on the IMSLP for Francis Davenport, the composer whose work came ahead of Stanfords symphony in the competition.

The name turned up once, as the arranger of a work by George Macfarren...

Great post. Check out Stanford's 6th... it's a beauty.