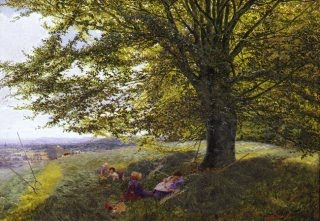 Herbert Howells was exceedingly unlucky. On two occasions he lost manuscripts whilst travelling by rail. The score of Missa Sabrinensis was in a briefcase thrown out of a train window by a thief. This was later recovered from the line-side. However he was not so lucky with the String Quartet In Gloucestershire. It is understood that the composer had completed the work in 1916. Travelling on a local train between Gloucester and Lydney he left the score on the train and it has never been seen since. However three years later he began to remember themes and progressions from the original work and decided to rewrite the entire composition. The outcome was a completely new quartet, with some of the themes from the original and many new tunes for good measure. There were a couple of other revisions in 1920 and later in the 1930s. Palmer points out that the 'textual history' of this quartet is exceptionally fraught and suggests that there is much work to be done unravelling the revisions. As the notes were written in 1984, perhaps this detective work has been done?

There is no way that this quartet, Howells's third, can be epitomised as 'pastoral' music in the sense of a 'cow leaning over a fence.' It is, instead, a reflection on the emotions generated as a response to a very particular landscape, perceived perhaps with very special people in mind. There is a hill just outside of Gloucester that is called Chosen or Churchdown Hill that commanded a fine view of the Malverns and the Severn Valley. This hill was beloved by Howells and was haunted by his friends, including Ivor Gurney and Gerald Finzi; it is the inspiration for much of Howells' music and certainly forms a backdrop to the present piece.
rrr
The Great War had been killing 'doomed youth' for two years when Howells first set pen to paper. Due to ill health he was unable to enlist in the army and this led him to considerable feelings of guilt. His rewriting and revisions were carried out in the aftermath of the war. He had seen what it had done to his friends - especially the poet and composer Ivor Gurney. The same poet, recalling his explorations with Howells remarked that the scherzo sounded like 'a great spring wind blowing the hair of the exultant traveller wandering without purpose save to find beauty and be comrade with the wind.'
bb
Yet this work is not all depression. It is a response to the landscape, in many ways a celebration of Howells' native heath. It is work of many moods. The first movement feels like a summer's day in the Cotswolds. The slow movement is a personal statement by Howells. This is the heart of the work; elegiac by design and deeply felt. The third is a breath of fresh air as Gurney pointed out in the quotation above. The last is almost dance-like.
mmm
In Gloucestershire can be heard on EMI . Unfortunately there only appears to be one recording of this work at present
Posted by John France at 06:00

The other recording of "In Gloucestershire" that is no longer in the catalogue appeared in 1996 on as part of the EMI British Composers series. It was performed by the Britten Quartet and is coupled with the Delius String Quartet dated "Spring 1916" and Howells' Fantasy Quartet. This recording is wonderfully atmospheric as is the Hyperion CD. If one can find it used, it is well worth having or perhaps EMI might reissue it one day.
Pam

Karen or John, do you know if the EMI recording uses the same version as the hyperion one? Two of the different versions of "In Gloucestershire" are performable as far as I know.
Just a suggestion: the Magginis should record Howells' complete string quartets for naxos. There is actually no recording of "Lady Audrey's Suite", is it?

The former was by the Britten Quartet and the latter by Divertimenti. Good suggestion about the Maggini and Lady Audrey!

I would very much like to know which version of "In Gloucestershire" the Britten Quartet recorded? According to Christopher Palmer (hyperion booklet) the Divertimenti recording was the first recording of the so called "definitive version" - the last one.
Until now this is the only recording I have listened to and I would like to know how much the separate versions differ. Is it audible for the ordinary listener? As Karen said, the EMI is no longer available for comparison.

Just happened to notice this topic. I was one of EMI's producers in the 1990s and I had the great fortune to work with the Britten Quartet on many occasions. I produced the Howells and Delius album - and in fact I think it might even have been my idea that they tackled In Gloucestershire. Those sessions contained some of the most memorable and haunting music making I experienced in the studio in almost a decade at EMI, and the resulting CD got great reviews. It's really worth hunting out.