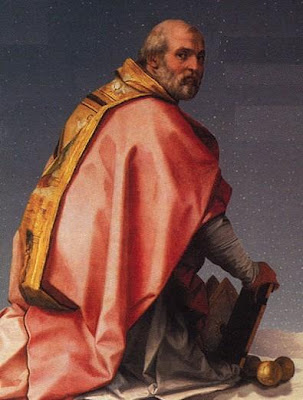 Recently, I was in a shop in Manchester, and in the background the ‘seasonal’ music was being played. However, in amongst the Jingle Bells, and the God Rest you Merry Gentlemen, I suddenly became aware of something a little more unusual. It was William Mathias’s exuberant carol Sir Christèmas.

Sir Christèmas is part of William Mathias’s large sacred work, Ave Rex. This piece was first performed in December 6 1969 by the Cardiff Polyphonic Choir in Llandaff Cathedral under Roy Bohana. Ave Rex was commissioned by the choir. This work is a sequence of three contrasting anonymous medieval carols framed by a dramatic setting of the invocation Ave Rex itself. The three carols are a high-spirited Alleluya; an introspective setting of There is no Rose and finally the cheering and joyful St Christèmas. The work concludes with a reprise of the sequences opening material. However, Sir Christèmas has become separated from the sequence and has become a popular carol in its own right.

The office of Sir Christèmas is surrounded in mystery, but he appears to be some kind of messenger combined with a master of ceremonies. The text is fairly explicit on this point. He is welcomed by the assembled worshipers or carollers and bade to draw near. He announces that ‘a maid hath borne a child full young’ and this is the real reason they are singing ‘Nowell’, which of course is a corruption of the French ‘Noel’ for Christmas. But then the old knight bids the assembly to “Buvez bien, buvez bien par toute la compagnie” (Drink up, drink up, with all the company) He elaborates on the Christmas story before reminding everybody to sing with us now joyfully- “Nowell, nowell”.
The text is anonymous and exists in a number of versions. It is believed to have been written prior to 1500. There is a setting by Richard Smart (or Smert) who was a vicar choral at Exeter cathedral from 1428 until ca.1474, and subsequently vicar of Plymtree, near Exeter, in 1435-77. He collaborated with a certain John Trouluffe in producing a collection of carols.


The carol is written in 12/8 metre throughout and the basic structure is strophic with the variety provide by the refrain. The stanzas are presented in different ecclesiastical modes by either the basses or the sopranos. It commences with rhythmic organ chords before the sopranos and tenors enter with the first shout of Nowell- at this stage in octaves. The altos ask “Who is there that singeth so?” and are responded to by the refrain, still in octaves. After the basses announcing that “I am here, Sir Christèmas” the full chorus bids ‘welcome’ in largely five-part harmony with the organ part replicating the singing. The basses are entrusted with the first words of Sir Christèmas’s message with the sopranos explaining the circumstances of Jesus birth. The following exclamations of the refrain are written in parallel ‘fifths’. Finally the full chorus encourages the assembly to Drink Up! And the carol concludes with ten ‘Nowells’ - the final being delivered as a shout!

There is little in the way of criticism of this carol, but Elizabeth Poston has written encouragingly about the whole work which “provides 14 minutes of very worthwhile music for preferably a sizeable choir…and ends with […] Sir Christèmas with its seasonable admonition buvez bien.” Furthermore she felt that “the organ writing is effective and un-stereotyped.” Musical Times October 1970. Geraint Lewis on his programme notes to the Nimbus recording of Ave Rex has pointed out that this carol “provides a reminder that the carol form has its origins in dance.”
Malcolm Boyd has written that the “same choir and conductor introduced another new work, William Mathias's Ave Rex op 45, in their concert of Christmas music with Richard Elfyn Jones (organ) on December 6. In this sequence of four medieval carols Dr Mathias not only manages to bring a fresh approach to texts as well-worn as There is no rose of such virtue and Sir Christèmas, but even succeeds in persuading us as we listen that they were written for no other music than his own”. Musical Times February 1970 p.188.
He further suggests that this is a secular carol and notes the mix of French and English text. He insists that Mathias’s “folk-like and jig-like” music is entirely appropriate to the spirit of the words.

There is an excellent performance of this carol by the Choir of Winchester Cathedral on Youtube. In this recording the organist is supported by a brass chorale.

The carol is published by Oxford University Press in four versions:-
1. SATB with organ accompaniment
2. SATB with brass (3 tpt, 3 tbn or 2 hn, 2 tpt, 3 tbn, tuba) with timpani, percussion, optional organ
3. SATB with strings and organ or
4. SATB with full orchestra.
It is also available in the second volume of Carols for Choirs p.114.
Posted by John France at 06:00

It is also in 100 Carols for Choirs from OUP.